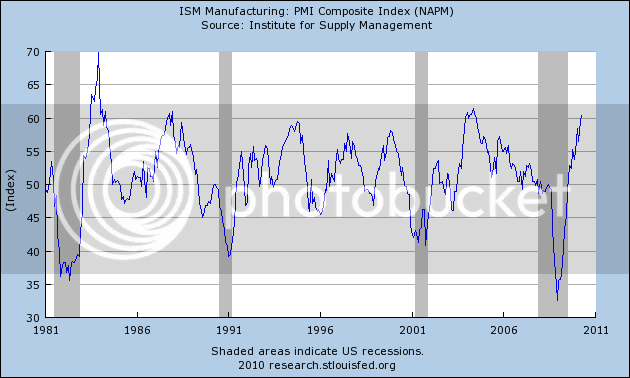 Almost all of its components likewise showed increasingly strong expansion. Inventories continue to shrink, at a faster rate. New Orders are growing very fast at 65.7. Supplier deliveries are falling further behind (a good sign).
And most on point, employment at 58.5 showing not just growth, but faster growth. For manufacturing, this is like the V-shaped recoveries of the 1970s and 1982-3, and not at all like the weak recoveries in 1992 and 2002.
Likewise, auto sales were reported at 11.2 vehicles on an annualized basis, holding on to two-thirds of their strong advance from February to March. 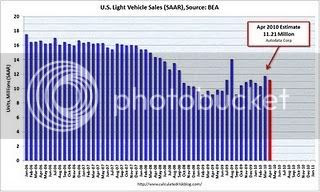 Recall that in February annualized sales were 10.3m (as Toyota's sales fell dramatically). March's 11.8m annualized sales were fueled by the resulting Toyota incentives. In April Toyota dropped most incentives, making April the first "clean" auto report since January.
Spencer at Angry Bear contends that, as gas prices go up as a share of disposable income, car sales go down. Thus, this was a good number, as it means that gasoline prices have not yet caused a reversal of the improving trend in car sales.

This morning new factory orders blew out to the upside:

You don't have to believe me, but how about Warren Buffett? Berkshire Hathaway owns a variety of "meat and potatoes" companies, from furniture to utility to railroads. Thus Warren Buffet has a unique perch from which to view the economy.

Here's what he said yesterday:

Based on the performance of his companies, he said there has been a 'big pick-up' in manufacturing this year, although it's not as productive as it was three years ago. He believes the retail market in the US has not picked up as much yet as manufacturing, but the sale of luxury goods is improving.
Overall, he pointed out the US economy has picked up and is set for a rapid 'V-shaped' recovery:
'There was a lot of strength in March and April. It won't be translated into huge changes in unemployment soon, but the economy is starting to move.'

In short, the V-shaped manufacturing recovery is continuing.
Posted by New Deal democrat at 9:30:00 AM