First of all, I want to thank our co-blogger Invictus who has been corresponding with the St. Louis Federal Reserve about adding new data series and functions to their Fred site. Among the items he asked them to add were the ISM non-manufacturing subsets, and they have now done so.

That comes in handy, as the ISM non manufacturing index was released yesterday, rising more than expectations to 53.0. The business activity sub-index rose from 52.2 to 54.8, and new orders rose from 54.7 to 55.0. Inventories are still contracting (a good sign) but a little more slowly at 46.0 . The employment sub-index also rose, from 44.6 to 48.6 - which means that employment is just barely contracting. 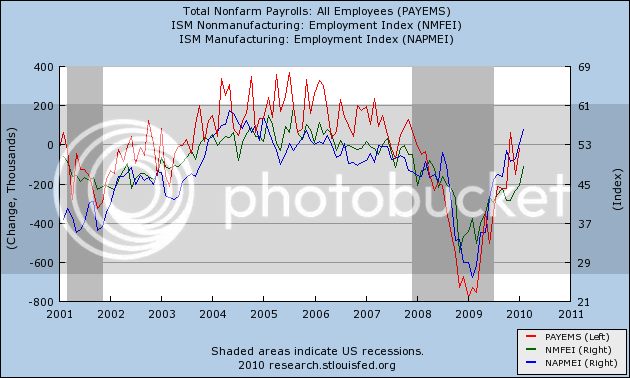 Please also note, jobs were (just barely) added in mid-2002 even though both employment indexes were below 50 but were above 45 -- so today's employment subindex number of 48.6 is no impediment to actual job growth. A nice scatter graph showing that an ISM services employment reading over 47.5 has almost always coincided with services job growth is available at Calculated Risk here .

This time around, as I have mentioned a number of times previously, services employment was much more severely impacted by layoffs than in prior recessions -- instead of being about 10% of the layoffs, they were fully half -- about 4 million jobs.

Given the "Bifurcated recovery" I wrote about on Monday, and the fact that my "leading employment index" which predicted job growth in November or December +/- 1 month looks like it came close, but not cigar, I have been thinking about what would best tweak the index to make it more predictive.

One obvious way is to insist that GDP growth appear like it could equal 2% YoY in the current quarter. That wasn't going to happen in 4Q 2009, even with the first report of 3.8% annualized growth in the 3rd quarter. Another way is to include either housing permits/starts and/or the ISM non-manufacturing index in a weighting with ISM manufacturing to form that component of the index. That is to say, manufacturing isn't the only leading component of the economy, so is housing, and services tend to come back first before goods-producing jobs, so a better index might include a weighting of those.

Based on the above, although the non-manufacturing index is only 13 years old, it appears that its business activity subindex does add value to any leading employment index for nonfarm payrolls, as set forth in the two graphs below:

Here they are for the 2001 recession: 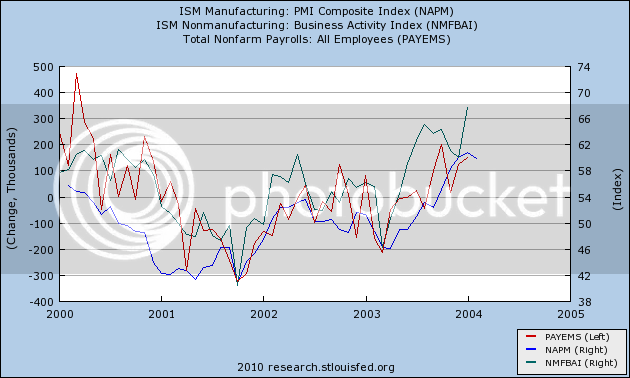 and here they are for the current recession (minus yesterday's reading): 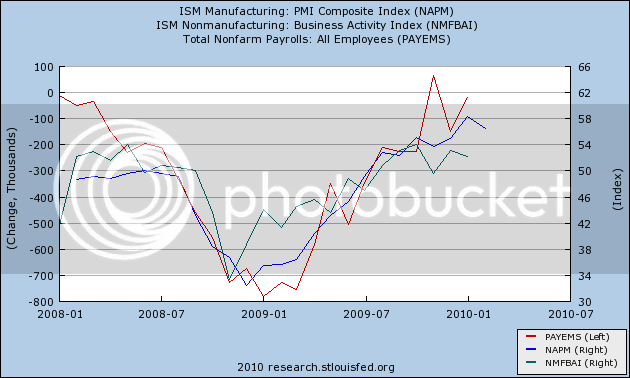 My original "Leading Employment Index" relied on an ISM manufacturing reading above 53. We can tweak that in a manner consistent with both above graphs by insisting on the following:

As I see it, the only way employment doesn't turn positive by next month would have to be very large layoffs in the construction industry overwhelming hiring in manufacturing and services. We'll see how that pans out.
Posted by New Deal democrat at 9:30:00 AM