In response to a recent post on the latest GDP revision, a commenter posted the following:

Laughing at those who said the GDP would be revised downward is a legitimate thing to do. But only if you were to give us some details about this upward revision, as you have done in the past when GDP is released. Why not explain how the analysts are wrong who are saying that this GDP upward revision is indicative of a worse situation for actual growth than the lower GDP number announced last month?

First, note the use of the "some analysts are saying this is bad" -- a tactic that a person with press experience should find reprehensible (of course, unless you're doing it). Secondly, think about the actual statement being made: "prove to me more growth isn't in fact worse." This is the standard upside down logic of the doom and gloom crowd -- for whom there is no good news. But more to the point: the number was revised higher. That means there was more growth. More growth is better than less growth -- at least in the reality based community. Remember shows like Sesame Street and their nice little presentations of concepts like big and small or more and less? That's pretty much where we are here.

At this point, Bill Engvall would say, "Here's your sign."

Personal consumption expenditures compose the largest component of GDP. In addition, PCEs are divided into three sub-categories which are (from the largest to the smallest) services, non-durables and durables. 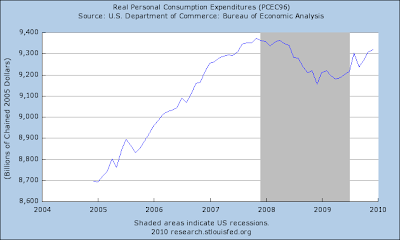 First, the overall trend for all real (inflation -adjusted) PCEs is still higher. 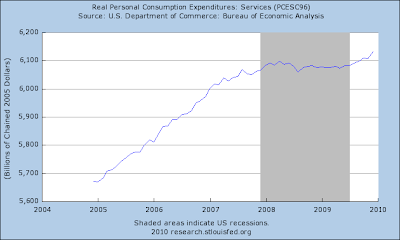 Services (which comprise about 67% of PCEs) are starting to increase after flat-lining for several years. 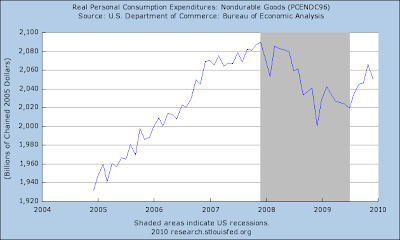 Purchases of non-durables dropped, but this is after 4-5 months of increases. 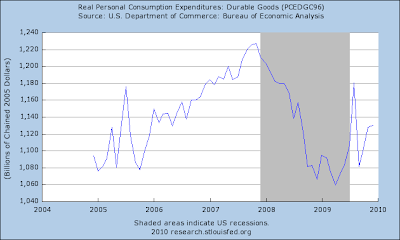 Let's move on to investment: 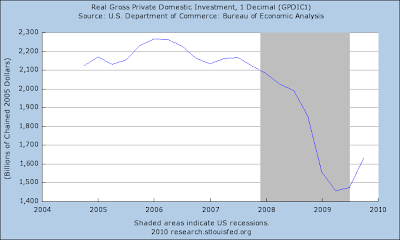 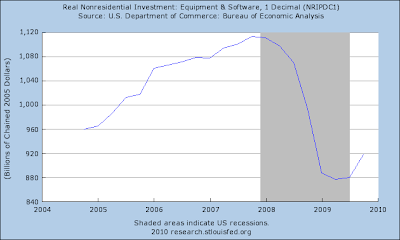 With equipment and software investment providing a fair amount of the growth. 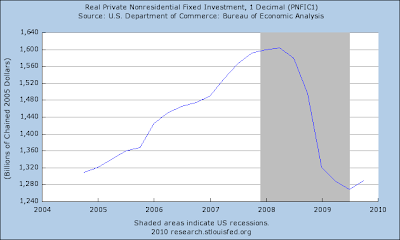 Non-residential fixed investment is bottoming as is 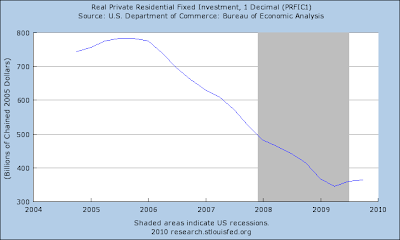 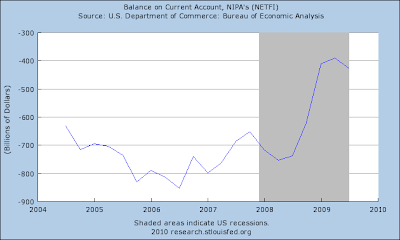 The import export business appears to be moving back into its old, familiar situation: the US is again becoming a net importer. The total trade balance appears to topping out and will resume its old, downward trajectory.

Let's take a look at some of the data from the report:

First, PCEs did decelerate. But this is in line with my projections for GDP growth which I made last year. Briefly, while the US economy is use to PCE growth in the 3-4% range, I think we'll see them grow in the 1-2% range. So, the drop to 1.7% quarter to quarter growth isn't a concern.

While the overall trade deficit pattern appears to be returning to its old ways, it is important to note that exports are increasing. This is due to other countries buying US goods and services. In fact, exports actually added to growth last quarter accounting for 5% of overall growth.

Perhaps the best part of the report was the contribution from investment. The economy grew 5.9%, 4.63% of which was investment. In other words. investment accounted for a whopping 78.47% of growth.

I suspect what "some analysts" don't like is that inventory restocking accounted for 3.88 or 65% of overall growth. However, the "concern" over this number is misplaced. First, inventories are at very low levels: 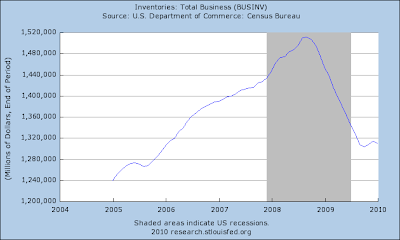 There is plenty of room for restocking, especially in light of how lean inventories are: 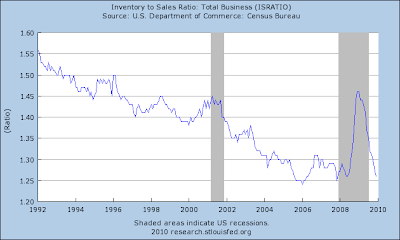 As demonstrated by the lean inventory to sales ratio. Again, this is a development I anticipated in the August 31 article cited above.

In short, this is still a good report. We'll have to wait and see what the final report says before we draw really firm conclusions, but overall this is a good report -- despite what "some analysts" say.
Posted by Unknown at 11:30:00 AM