Nonfarm private employment decreased 20,000 from January to February 2010 on a seasonally adjusted basis, according to the ADP National Employment Report®. The estimated change of employment from December 2009 to January 2010 was revised down, from a decline of 22,000 to a decline of 60,000. The February employment decline was the smallest since employment began falling in February of 2008.

Two large blizzards smothered parts of the east coast during the reference period for the BLS establishment survey. The adverse weather had only a very small effect on today’s ADP Report due to the methodology used to construct it. However, the adverse weather is widely expected to depress the BLS estimate of the monthly change in employment for February, but boost it for March. Therefore, it would not be unreasonable to expect the BLS estimate for February (due out this Friday) to be less than today's ADP Report even though the BLS estimate will include the hiring of temporary Census workers not captured in the ADP Report.

Let's look at the data. Click on all images for a larger image 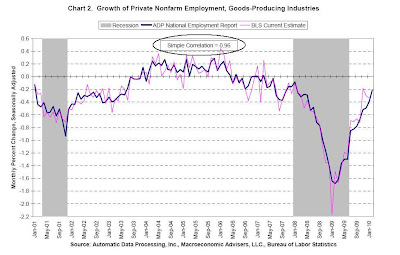 Note the ADP and BLS report are highly correlated. 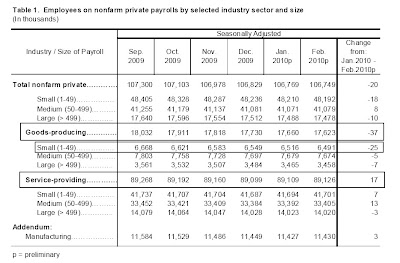 Note that manufacturing -- especially small manufacturing companies -- are the primary reason for the drop in goods producing industries. Services are adding jobs -- especially in the medium size group. Also note the following chart of service jobs: 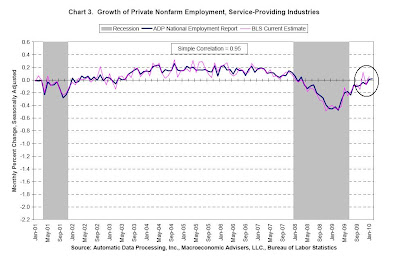 Once again we have a comment on how the weather is effecting the numbers. Again, I'm not sure about the accuracy of these statements, but I could be wrong.
Posted by Unknown at 2:00:00 PM