A Note on the Housing Market

The existing home sales market is by far the largest of the housing markets. Notice that over the last roughly 2 years the pace of sales has stabilized between (roughly) a 5.25 million and 5.75 million annual pace. That is what a bottom looks like.

New home sales appear to have bottomed at the end of this year and are now increasing.

The increase we've seen in both of these numbers will likely drop over the next few months; home buying typically increases up to the end of the summer when before the start of the school year.

There has been a lot of internet chatter about the shadow inventory: these are homes that are in the process of being foreclosed on but have not yet been sold. In other words -- there are a slow of homes out there ready to hit the market to create another set of problems.

The WSJ did an analysis of this problem. Here is their conclusion:

As of July, mortgage companies hadn't begun the foreclosure process on 1.2 million loans that were at least 90 days past due, according to estimates prepared for The Wall Street Journal by LPS Applied Analytics, which collects and analyzes mortgage data. An additional 1.5 million seriously delinquent loans were somewhere in the foreclosure process, though the lender hadn't yet acquired the property. The figures don't include home-equity loans and other second mortgages

Moreover, there were 217,000 loans in July where the borrower hadn't made a payment in at least a year but the lender hadn't begun the foreclosure process. In other words, 17% of home mortgages that are at least 12 months overdue aren't in foreclosure, up from 8% a year earlier.

Some borrowers may be able to catch up on their payments or receive a loan modification that helps them keep their home. There has also been an increase in short-sales, transactions in which at-risk borrowers sell their homes for less than the loan amount, with the lender's approval. In some cases, lenders have decided not to foreclose because the home's value is so low. These factors could mean fewer foreclosures.

Foreclosed homes are partly responsible for the recent increase in home sales. But foreclosures also push down home values. According to Collateral Analytics, a housing research firm, homes that have been foreclosed on typically sell at a 10% to 50% discount.

But the number of foreclosures is expected to increase in the fourth quarter as mortgage-servicing companies determine who is eligible for a loan modification and who isn't. "We are going to see a spike from now to the end of the year in foreclosures as we take people out of the running" for a loan modification or other alternatives, says a Bank of America Corp. spokeswoman. Foreclosure sales had dropped to "abnormally low" levels in response to government efforts to stem foreclosures, she adds. 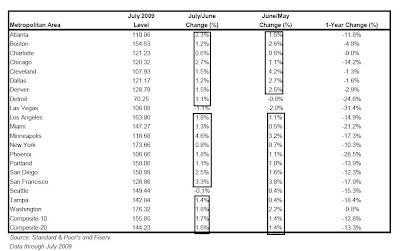 And decreasing at a lesser rate on a year over year basis: 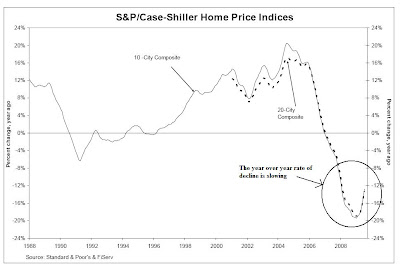 My guess is the following will happen. Prices will be under pressure for some time. However, prices have also moved to a level where prices are very affordable and where they are attractive investment purchases. In other words, the sales pace will at worst remain stable.
Posted by Unknown at 2:00:00 PM