Nonfarm payroll employment continued to decline in September (-263,000), and the unemployment rate (9.8 percent) continued to trend up, the U.S. Bureau of Labor Statistics reported today. The largest job losses were in construction, manufacturing, retail trade, and government.

I had thought that we could continue to see a decline in the number of job losses. However, that obviously did not happen.

CBS Marketwatch summed the report up:

Details of the report were almost universally dismal, with the number of unemployed people rising by 214,000 to 15.1 million. Of those, 5.4 million have been out of work longer than six months, accounting for a record 35.6% of the jobless. The employment participation rate fell to 65.2%.

An alternative gauge of unemployment, which includes discouraged workers and those forced to work part-time, rose to 17% from 16.8%.

Let's look at a few points from within the report:

The overall trend in the rate of job losses from the beginning of this year is still lower. Also note we had the same situation in June when losses spiked only to move lower the next month. 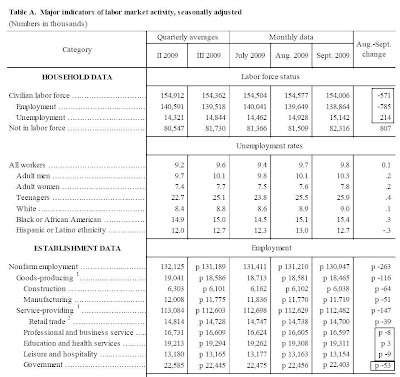 The rate of job losses in three job categories is near 0. Oddly, the government lost 53,000 workers. That number seems a bit odd during the middle of a stimulus program.

All that being said, this is a clear step in the wrong direction. Considering the rate of job losses at the beginning of the year (600,000+/month) expecting an immaculate recovery is highly unrealistic. However, the bleeding has to stop at some point. So by the end of this year we have to be far lower than today's number for a recovery to be viable. Consumers cannot continue to hear news like this and expect to have a positive attitude about the economy. It's that simple.
Posted by Unknown at 7:55:00 AM