Over the last few days we're seen come good economic reports come out. Let's go to the data (click on all pictures for a larger image). 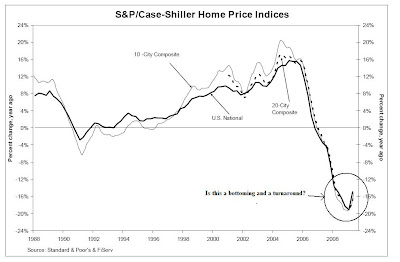 On the year over year price chart of the Case Shiller index we're still in negative territory. But, the rate of decline appears to be decreasing. This is a very important development as it indicates the price free-fall may be over. In addition, 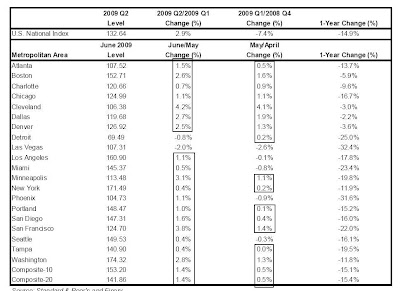 This is the second month in a row when we're seen the month to month price movements print around 0 or slightly positive. This is not a trend yet. But we're clearly moving in the right direction.

Here is the chart:

Notice that last month was a big jump. But even without transportation orders we still saw a big increase. And notice that year over year number has bottomed out as well.

And finally we have this:

Purchases of new homes in the U.S. jumped more than forecast in July, adding to signs that the economy is rebounding from the worst recession since the 1930s.

Sales increased 9.6 percent, the most since February 2005, to a 433,000 annual pace, figures from the Commerce Department showed today in Washington. The number of houses on the market dropped to the lowest level in 16 years.

The gain in sales, together with rising purchases of existing homes and steadying prices, indicate the housing slump may be ending as Federal Reserve efforts to thaw credit and the Obama administration’s first-time homebuyer incentives lift demand. Job losses and mounting foreclosures mean any rebound in construction may be limited.

“We’re seeing a clear pickup in housing activity,” said Michael Moran, chief economist at Daiwa Securities America Inc. in New York. “The correction phase is essentially over and we expect continued improvement, though not a vigorous pickup.”

Here is the chart:

Notice that the pace of home sales appears to have bottomed in the early part of this year and have been rising since.

These are all good developments and add further credence to the bottoming argument.
Posted by Unknown at 1:00:00 PM