Landing on the FDIC's problem list means a bank is at a high risk of insolvency. State and federal regulators have already shut 81 banks this year.

"It's a continuation of the deterioration across the industry," said Gerard Cassidy, a bank analyst with RBC Capital Markets. "We think there are hundreds of failures to come."

There are a few points to make about this data.

The total amount of assets on the problem list is $300 billion. This is not good, but it is not terrible either; the asset size is manageable. In addition, that assumes a 100% failure rate of the banks which is doubtful. In addition, consider this chart from Calculated Risk: 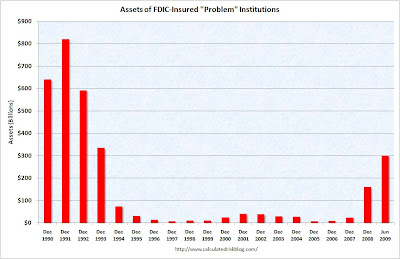 In short, we've been through far worse times when far more assets were a problem.

The swelling of the problem list could be a harbinger of further industry consolidation, analysts said. Large, healthy banks, several of which have paid back their government-rescue funds, are "chomping at the bit" to buy failed lenders from the FDIC, and Thursday's report is likely to further whet their appetites, said Ed Najarian, head of bank research at International Strategy & Investment Group Inc. "They're looking at it as more opportunity to acquire banks."

We've seen the FDIC and government regulators do a lot of shotgun weddings in the banking industry. My guess is there are alot of phone calls going on right now to see who wants to acquire what bank.

The primary problem this situation creates is a decrease in lending as the economy moves forward. In actuality from the consumer's perspective this development couldn't happen at a better time as consumer loan demand is dropping. From the commercial side it's an issue and will probably hinder growth.

All this being said, this is a bad development. But so far it is a manageable disaster -- that is, between industry consolidation, an increase in loan loss reserves and the total amount of assets under pressure this situation can be dealt with. However, that could change it the situation continues to deteriorate.
Posted by Unknown at 9:30:00 AM