Those who have followed me over at Blah3.com know of my affinity for the Chicago Fed’s National Activity Index (CFNAI). I like it because it’s an amalgam of 85 distinct data points that has a very good historical correlation to the ebbs and flows of the business cycle.

The Chicago Fed describes it this way: “The CFNAI is a weighted average of 85 existing monthly indicators of national economic activity. It is constructed to have an average value of zero and a standard deviation of one. Since economic activity tends toward trend growth rate over time, a positive index reading corresponds to growth above trend and a negative index reading corresponds to growth below trend.” (See here for a .pdf of the 85 components and their weightings.)

The folks in Chicago also advise us to look at the 3-month moving average for a better take on what’s going on with the economy.

This recession is the seventh covered by the CFNAI. Of the previous six, only three have seen the 3-month MA dip below -2.00, and our current recession hit -3.63 in January. So I thought it might be interesting to see what the prior deep (CFNAI breaches -2.00) recessions looked like in CFNAI terms. Here’s what I found: 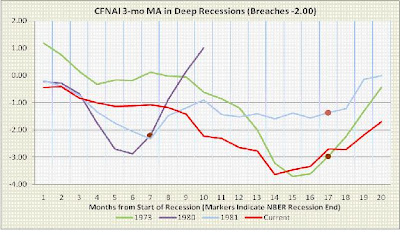 The 1980 recession saw the recession end with the 3-month MA at -2.20; the very next print was -0.89. Unfortunately, that recovery was unsustainable, and the economy slipped back into recession about one year later, with the 3-month CFNAI spending most of that time in negative territory and never moving above 1.17.

For the three “deep” recessions, the average 3-month CFNAI value in the first month of recovery is -1.45: 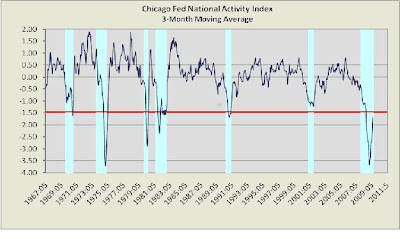 As I mentioned previously, I continue to be very concerned about sustainability, and strongly suspect the NBER is going to take its sweet time to make an announcement, as they need to be sure the economy is standing on its own two feet and not being propped up primarily by government largesse. Having said that, we appear to be on the cusp of moving toward a number that might signal recession’s end – or at least a brief hiatus until its resumption.
Posted by Unknown at 11:30:00 AM