The oil charts are very interesting largely because they are pretty conflicted. As always, click on all for a larger image. 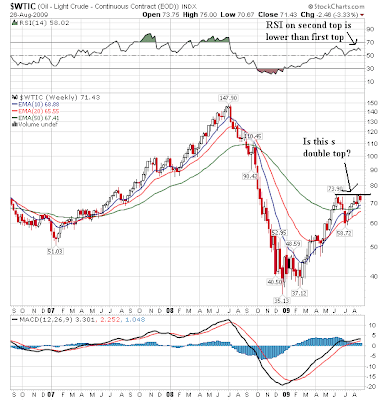 First, the bullish side. Prices are rising and the EMA picture points to higher levels. The 10 and 20 week EMA are moving higher, the 10 week EMA has crossed over the 50 week EMA and the 20 appears ready to do so. Now the bearish side. The RSI printed a lower number on the second price top and the MACD's upward trajectory is less. The first point is very concerning as it indicates recent prices are less technically strong than earlier prices. The MACD issue is one of subjective interpretation. I would like that angle to be higher as prices move higher. 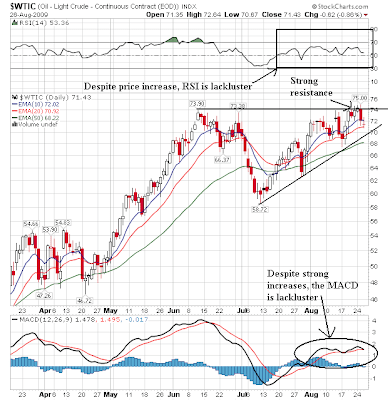 The daily chart is also split. The bullish side is that prices and the EMAs are increasing; the shorter EMAs are above the longer EMAs -- the most bullish configuration possible. However, despite the increase in prices, the RSI is not increasing. In fact, it has been posting moderate numbers throughout the recent rally. And as with the weekly chart, the MACD is is still in a weak uptrend.

The central question with this chart is are we forming a double top? We're nearing the end of the summer driving season which is a traditionally bearish time. However, we've also seen some strong economic prints from other parts of the world. China and India never really hit a recession; Germany and France grew last quarter. All things are pointing to an increase in oil demand.
Posted by Unknown at 6:43:00 AM