This is from Invictus

Those who may have followed my work over at Blah3.com for the past few years know that I have the utmost respect for ex-Merrill Lynch economist David Rosenberg. The reasons are twofold – Rosie always calls it as he sees it and he peels the onion many layers – not just one or two – to expose data and trends that aren’t apparent to the casual analyst or economist (the analogy’s a good one, since what he uncovers often does make me cry). Therein lies Rosie’s true genius. You can expect that I will continue to make reference to his outstanding work as I participate here with Bonddad.

His recent work continues that pattern, and much of what appears below is based on some of Rosie’s recent writings.

First, let’s look at a stat that has gotten widespread attention (not a lot of sleuthing required to uncover this one): the savings rate (as percent of Personal Disposable Income). 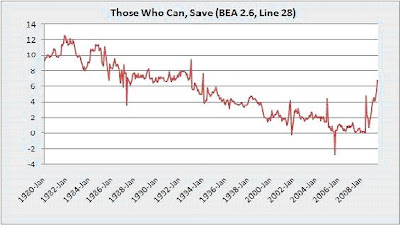 The repair of Americans’ balance sheets (following unprecedented wealth destruction via stock market and real estate declines) is going to require ongoing increases in the savings rate. This trend is underway, and will continue for some time to come.

In addition to replenishing their diminished savings, Americans seem to have concluded that, at least for the time being, less debt is better than more debt, as this chart attests: 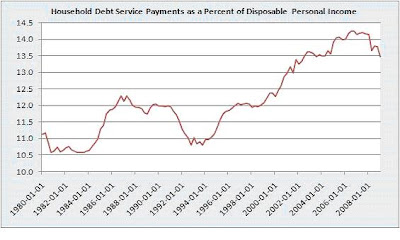 (Data: St. Louis Fed, Series TDSP)
While Americans are saving and paying down debt, it appears they will likely be spending less. Here is a graph of Personal Consumption Expenditures (PCE) on a year-over-year percentage basis: 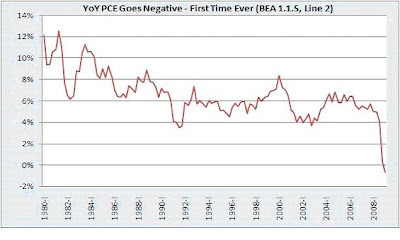 Year-over-year PCE has gone negative for the first time ever.

So consumers are truly hunkering down, saving more and spending less. If they are to spend more at some point (and not just tread water on essentials), either incomes will likely have to rise or balance sheets will have to be sufficiently repaired through continued savings. (Those who argue that the government should similarly tighten its belt always seem at a loss to explain how the economy will grow if no one – consumers, states, municipalities, federal government – is spending money, but that’s another story, I guess.)

So how does income look? Here is one component of BEA’s Personal Income release – Line 3 of Table 2.6, Wage and Salary Disbursements (shown in YoY Pct change): 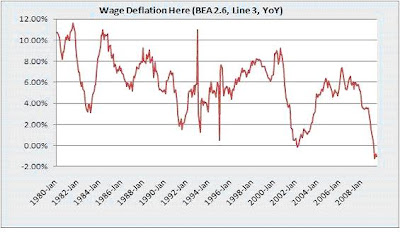 The bottom line is that wage deflation is no longer something to be feared down the road – it’s here right now.

Well, you ask, if wages and salaries aren’t rising (which they aren’t), is there a component of Personal Income that is rising? Yes, there is – it’s Government Transfer Receipts (shown as a Pct of Income): 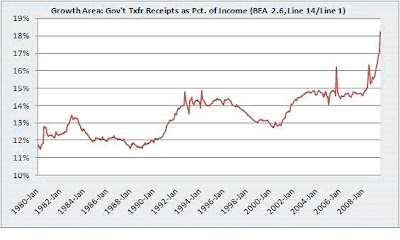 Wages and salaries going down. Government transfer receipts going up. Is this a recipe for renewed consumer spending growth? Are the people who are earning less going to be spending more? Are people who are receiving assistance from the government going to be using said assistance for discretionary purposes? I think the answer to all three questions is a resounding “no.”

Perhaps the most interesting piece of work Rosie produced recently was an analysis of how many unemployed individuals we currently have for each job opening. Rosie looked at the Job Openings and Labor Turnover Survey (JOLTS) data from the BLS and the number of unemployed (also via the BLS). Here’s what that ratio looks like: 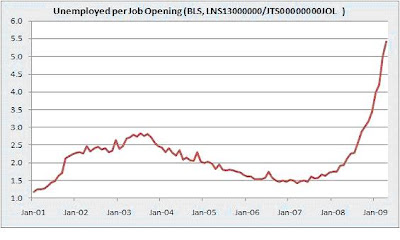 Rosie refers to this as “The Truest Picture of Excess Labor Supply,” and it’s hard to argue with that description. The Household Survey reports about 14 million unemployed, and the JOLTS reports about 2.5 million current job openings. Scary stuff.

There are many secular – not cyclical – cross-currents rippling through the United States right now. Much of what is happening is going to have long-lasting effects on what our economy looks like (see the July 5th NY Times for a story titled “Say Hello To Underachieving,” a cautionary tale about how even summer internships have dried up).

I mentioned previously that I hope to do some work on how our demographics will continue to have a negative influence on what our economy looks like going forward. Stay tuned for more on that.
Posted by Unknown at 9:30:00 AM