Invictus: A Lighter Shade of Green

While I have previously agreed with Bonddad and NDD that the “worst” of our economic woes are behind us, I’m cautious to the extreme about what a recovery might look like, and very dubious that one has actually begun.
I don’t think I’m feeling quite as “green” as they are, and here are just a few reasons why. I’ve circled what could have been (mistakenly) interpreted as green shoots at previous points during the recession. In the end, they were just head fakes. 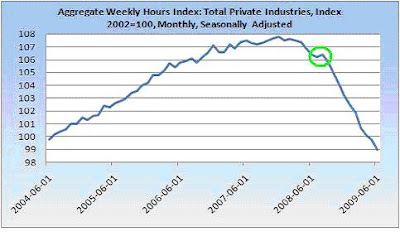 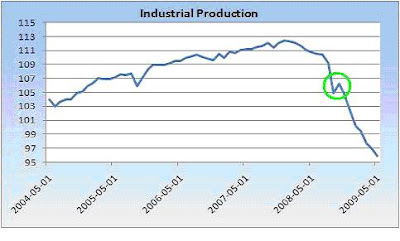 Industrial Production also gave us a head-fake green shoot last year, only to also fall precipitously again. It, too, has shown no sign yet of bottoming. We know that this is another measure closely watched by the NBER.

Lastly, at least for now (in the interest of getting this post up and a discussion started), let’s address Unemployment Insurance (UI) Claims. Yes, it is true that today’s number was better than expected, and that the four-week moving average has been moving in the right direction (i.e. down). However, after another false green shoot decline several weeks ago, continuing claims – which need to confirm the downward trend in the other UI series – have turned back up again, hitting another new record high today: 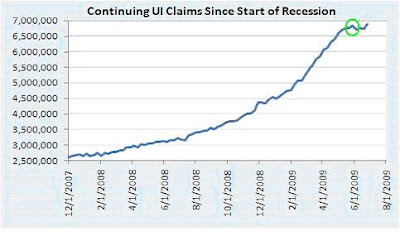 Look, I want this recession to be over as much as the next guy, but that fact that we’re all sick and tired of it just isn’t going to make it so. Yes, things have gotten a bit “less bad” of late. But “less bad” ≠ “recovery,” it only equals “less bad.” When we start seeing some real stabilization (dare I say improvement?) in the metrics that matter – especially to the folks who are going to make the call – we’ll have something to talk about, but not until then, in my humble opinion.
Posted by Unknown at 11:30:00 AM