Industrial production decreased 0.4 percent in June after having fallen 1.2 percent in May. For the second quarter as a whole, output fell at an annual rate of 11.6 percent, a more moderate contraction than in the first quarter, when output fell 19.1 percent. Manufacturing output moved down 0.6 percent in June, with declines at both durable and nondurable goods producers. Outside of manufacturing, the output of mines fell 0.5 percent in June, and the output of utilities increased 0.8 percent. The rate of capacity utilization for total industry declined in June to 68.0 percent, a level 12.9 percentage points below its average for 1972-2008. Prior to the current recession, the low over the history of this series, which begins in 1967, was 70.9 percent in December 1982.

This is one set of statistics that still gives me the willies. Or -- to put it another way -- if there is anything that could screw up the bottoming process it's this series of numbers. Thankfully there are finally in a "less worse" situation.

Notice the following on the above chart:

1.) The monthly decline series has been improving in fits and starts for the last six months. However, it is still negative.

2.) The first quartet numbers were worse than the second quarter numbers (although both are still negative).

In addition, the charts are downright ugly still (click on all for a larger image): 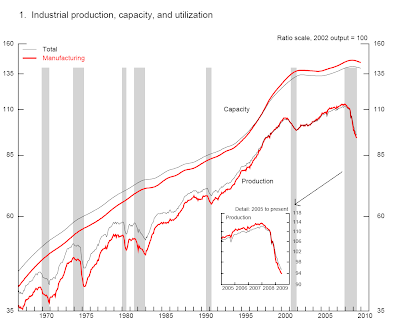 The capacity utilization number indicates we're going to have a low investment total at the beginning of the next expansion as manufacturers ramp up existing production at the expense of new buildings/facilities etc...

Bottom line: if there is one series that really threatens a recovery this is it.
Posted by Unknown at 9:30:00 AM