From the New York Federal Reserve:

The Empire State Manufacturing Survey indicates that conditions for New York manufacturers were flat in July. The general business conditions index increased to a level close to zero, rising 9 points, to -0.6. The new orders index rose above zero for the first time in several months, and the shipments index also climbed into positive territory. The inventories index slipped to a record-low -36.5. The prices paid index rose above zero for the first time since November, while the prices received index held below zero. Employment indexes remained well below zero. Future indexes continued to be relatively optimistic about the six-month outlook, but were somewhat less buoyant than in June. The capital spending index fell several points, but remained above zero.

And then there is this from the Philly Fed: 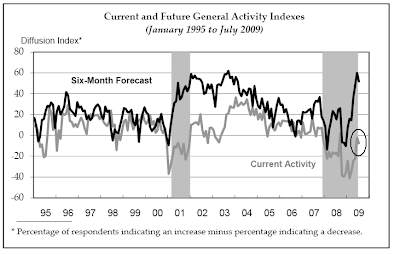 The index dropped just a bit: 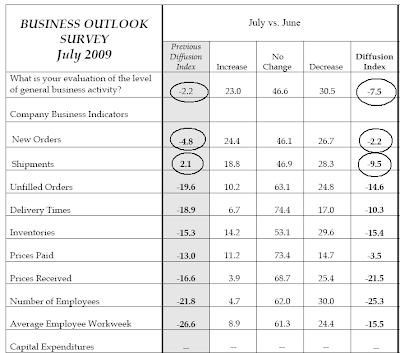 Bottom line -- we're almost at positive growth in both surveys.
Posted by Unknown at 9:30:00 AM