Will Trade Lead Us Out of Recession?

Consider the following chart from the Census Bureau: Notice that one benefit of the recession have been a declining trade deficit. This chart better shows the decline: From the Wall Street Journal:

"It's a very good sign for GDP," says Paul Ashworth, senior U.S. economist for Capital Economics in Toronto. "The economy didn't shrink by much in the second quarter, and there's an outside chance it recorded a gain." Forecasting firm Macroeconomic Advisers increased its second-quarter GDP forecast from minus 1.6% to plus 0.2% on the news.

To be sure, the good news on the U.S. export front was tempered by the decline in imports, which underscores how American businesses and consumers spent gingerly on imported goods. That is bad news for overseas economies that rely on the U.S. market. And trade overall remains far below levels from before the financial crisis.

"Arithmetically this suggests trade is going to be a big positive boost, but largely as a result of imports falling at a rapid pace," says Ted Wieseman, economist at Morgan Stanley in New York. Because exports boost GDP and imports drag it down, the narrowing of the trade gap helps boost the overall growth figure. Exports accounted for 13% of GDP in 2008.

Trade is only 13% of GDP so it can't be the primary driver of growth (at least not yet). But -- suppose it grew just enough to pick up the slack from the drop in consumer spending that is coming (or at least helped to slow the decline in growth). According to the latest BEA data personal consumption expenditures totaled $9.9 trillion in the first quarter while exports totaled $1.724 trillion. That means a 1% drop in PCEs would need a slightly larger 1% growth in exports (along with a stabilizing or declining imports).

However, consider that information with this:

And also consider this. The US is going to issue a large amount of debt over the nest four years. As a result, the US dollar will probably continue its move lower leading to cheaper exports. 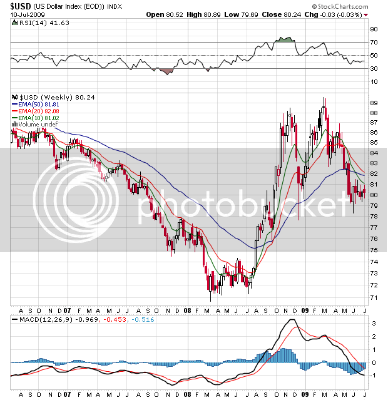 As the chart above shows, the dollar formed a double top over the last 9 months and has since been moving lower.

While I don't think this is a cure-all panacea, it is a very interesting proposition.
Posted by Unknown at 11:30:00 AM