From Invictus: Odds and Ends

At the risk of being all over the place, I’m going to throw out a potpourri of a few items that have caught my eye over the past couple of days.
Saw this cross the tape today (via Briefing.com):

“DJ reports FDIC Chairman Sheila Bair believes up to 500 more banks could fail, a U.S. senator said Bair told him in a recent meeting. "She told us that unless something dramatic happens, we could lose up to 500 more banks," Sen. Jim Bunning, R-Ky., said Thursday at a hearing of the Senate Banking Committee on the foreclosure crisis. Bunning said Bair made the remarks in a recent meeting. "That means that people who make mortgages in local places .... people that
could really help in a foreclosure will not be there," Bunning said.”

To my eye, the FOMC minutes were noteworthy for the number of qualifiers – but, albeit, though, however – that were interspersed throughout to send the message that things are crappy, BUT not as crappy as before.

“The information reviewed at the June 23-24 meeting suggested that the economy remained very weak, though declines in activity seemed to be lessening.

“But the reductions in employment and industrial production had slowed somewhat…

“Nonfarm payrolls continued to shrink, but the decline was the smallest since September.

“Industrial production decreased in April and May but at a slower pace than in the first quarter.

“In the high-tech sector, computer output fell at a pace similar to that in the first quarter, but near-term indicators of production turned somewhat less negative and global semiconductor sales climbed in April for the second consecutive month.

“Outside the transportation and high-tech sectors, most industries continued to cut production in both April and May, though at a slower pace than over the preceding five months.

“Real investment in equipment and software (E&S) continued to contract; however, the decline in the second quarter appeared likely to be smaller than in either of the two preceding quarters.”

It took me about 30 seconds to find those examples, and there are many more where those came from. I’m not encouraged that the Fed has adopted the “less bad” mantra.

I did some research into the Exhaustion Rate of Unemployment Insurance Claims, and finally found the data I was seeking at the DOL website (this page is just buried there and very hard to find: http://www.doleta.gov/unemploy/chartbook/chartrpt.cfm). Here’s their definition of the Exhaustion Rate and a chart of what it currently looks like:

“The exhaustion rate represents the proportion of claimants who collect all of their unemployment insurance entitlement. In this case, the entitlement is for the regular state program. The rate is computed by dividing all exhaustions from the regular state program over a 12 month period by the number of claimants who actually received at least one unemployment insurance payment over a 12 month period which lags by 6 months the period over which exhaustions are counted. The 6-month lag is used because claimants are entitled to up to 26 weeks of benefits. Using 12-month periods eliminates the influence of seasonal factors. The relationship of the exhaustion rate to the labor market's health is similar that of average duration.” 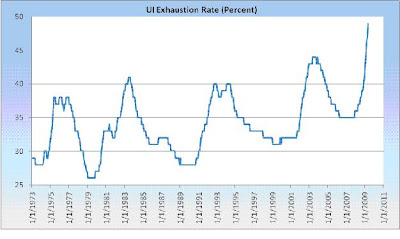 Continuing Claims took a record drop yesterday, some 640,000 down. Not exactly sure what factors may have been at play here, but it is certainly a step in the right direction if it holds up to revisions.

Lastly for now, blog proprietor Bonddad recently asked if trade could lead us out of recession. That question was, in part, answered by the FOMC in their minutes: “Economic activity in foreign economies was unlikely to be sufficiently strong to provide a substantial boost to U.S. exports.”
Posted by Unknown at 1:30:00 PM