Will the Energy Sector Outperform in 2017?

From the Dallas Fed:

Business activity continued to increase in the fourth quarter, according to oil and gas executives responding to the Dallas Fed Energy Survey. The business activity index—the survey’s broadest measure of conditions facing Eleventh District energy firms—rose to 40.1 from last quarter’s 26.7 reading. Several indicators expanded on a quarterly basis for the first time in 2016, including employment and production. Outlooks also improved, despite some skepticism about recent oil producer agreements, which respondents commented on in this quarter’s special questions.


Among oilfield services firms, the equipment utilization index rose again, posting at 35.9. The index of prices received for services jumped from -23.4 to 6.8, its first positive reading in 2016.


Measures of oil and gas labor market conditions turned positive for the first time all year, although the majority of respondents continued to report unchanged headcounts. The employment index came in at 3.4, with 18 percent of firms noting net hiring and 15 percent noting net layoffs. Indexes of wages and benefits and of employee hours also turned positive at 10.3 and 13.7, respectively


With improved oil prices, banks are more willing to extend credit lines to leveraged hydraulic fracturing or fracking companies that are looking to boost market share for the first time in two years, reports Swetha Gopinath for Reuters.


Through the latest calculation in the value of reserves in the ground with bank creditors, 34 oil and gas producers had their available credit lines raised an average of 5%, or over $1.3 billion, with a combined credit for the companies at $30.3 billion, compared to $28.9 billion at the end of spring 2016.


“The ‘animal spirits,’ seem to be coming back to the exploration and production market, albeit slowly,” Reorg Research analyst Kyle Owusu, referring to the human emotion that drives confidence, told Reuters.

Consequently, with more robust credit lines, fracking companies are set to expand operations and increase capital spending. Consequently, the oil services industry that caters toward these producers could also reap the benefits as well.

But see this from the Street.com


The energy sector has been the best performing S&P 500 sector so far in 2016, rising 24.3%, but investors should proceed with caution in 2017. Keith Bliss, senior vice president with Cuttone & Co., said the 2016 growth comes amid a stabilization in oil prices after the sector was slammed in 2015. According to Bliss, oil companies must get used to $50 to $60 oil. Plus, should OPEC fail to adhere to its proposed production cuts, which take effect in January, that may ding energy stocks, which are banking on higher oil prices, according to Bliss. 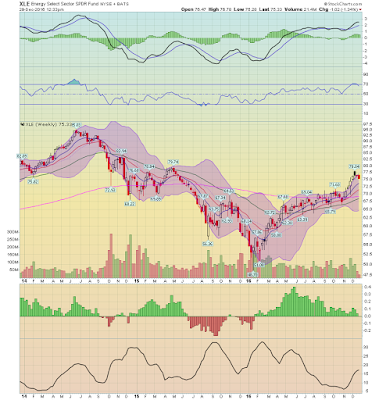 The XLE has a bit more upside room to run.  While the RSI is high, this indicator can remain at overvalued levels for long periods of time.  The MACD has some upside room.