The following is from the Conference Board:

The following chart and commentary is from the National Federation of Independent Business:

The Index of Small Business Optimism rose 3.5 points to 98.4, a substantial gain to just above the 42-year average of 98. Eight of the 10 Index components posted a gain, one declined and one was unchanged.  Expectations for real sales gains and outlook for business conditions accounted for 69 percent of the gain. The two employment components added 20 percent of the gain. The remaining six components were little changed. 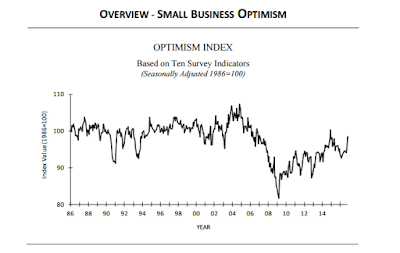 Analysis: For the consumer, this will probably lead to increased retail sales and personal consumption expenditures -- a confident consumer is more likely to increase expenditures.  This could lead to upside surprises in holiday sales and could also translate into an increase in auto and light truck purchases (these types of expenditures require financing which consumers don't take out unless they believe they can afford the payments over an extended time horizon).

As for business, an increase in confidence naturally leads to increased risk-taking.  I still think business will be a bit conservative; they may need to see more action from Congressional Republicans before making major changes.  I think the real issue here will be tax reform, especially a lowering of corporate and personal tax rates.