The US$ has ceased being a drag on the economy

The biggest drag on the US economy for over a year and a half has been the surging US$, which favored imports and hobbled exports, counteracting the benefit to consumers of lower gas prices.

As I have been documenting in the last several months, all of the trends from the 2015 economy are changing.  And the biggest, most important of those trends, the strength of the US$, has also changed.

Here is the YoY% change in the trade weighted US$,, both broad (blue) and against major currencies (red), as of the Fed's update yesterday: 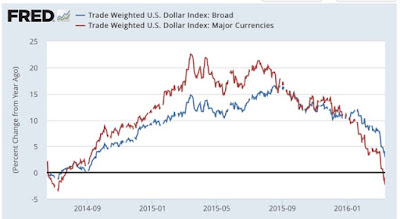 Not only is the US$ now down YoY against major currencies, but it has also faded to being just 3% positive YoY on the broad scale.  This is a much more neutral reading, as shown in this longer term view: 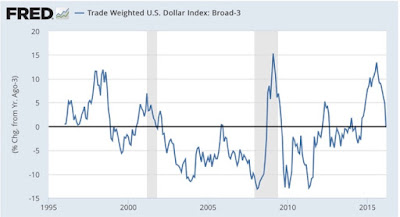 Note in particular that the YoY% change in the US$ has fallen to about where it was exiting the last two recessions.

It will take a few months at least before this feeds through into imports and exports, as well as corporate profits.  But for now the US$ has ceased being a drag on the economy.