Charles Dow's theory was that industrial production and the transportation of goods should move in tandem.

While we don't have any high frequency data with respect to manufacturing generally, last week I shared a graph showing that steel production appears to have bottomed, and indeed for the last two weeks the YoY change in steel has been positive.

On the transport side, rail traffic is reported weekly, but truck traffic only monthly.  The AAR report of carloads ex-coal shipments has been particularly encouraging.  Here's a graph of the last 3 years: 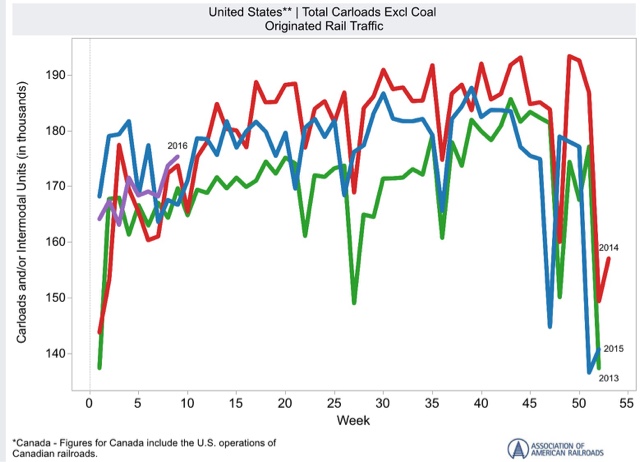 What is particularly positive about rail carloads ex-coal is that in the last few weeks, they haven't just been outperforming 2015, but 2013 and 2014 as well. They've been outperforming 2015 since mid-January.  And this measure doesn't include intermodal traffic, which is heavy with imported goods.  In other words, transport of domestically manufactured goods by rail looks pretty encouraging.  In a couple of weeks, the comparisons will get more challenging.

One pretty good monthly measure of trucking, meanwhile, is the Cass Freight Index, which just came out for February.  Since trucks do not carry coal very much, the comparison with rail carloads ex coal is a good one: 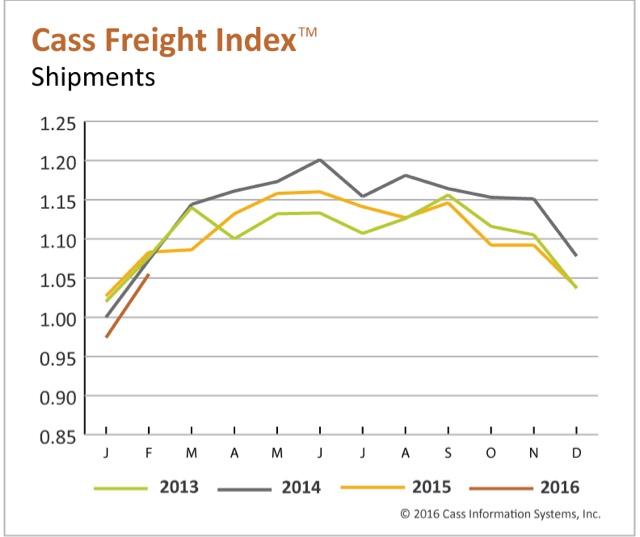 This is still negative YoY, but note that it is much "less bad" than any comparison since September.  And sufficiently so that it suggests that if we could seasonally adjust, probably late last autumn was the bottom.  We'll have to wait a month and see if trucking follows rail into positive territory in March.
Posted by New Deal democrat at 8:16:00 AM