I am running out of positives 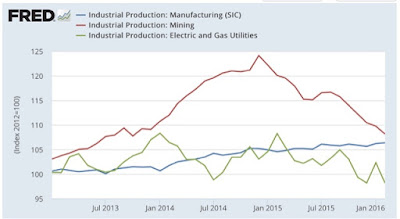 Now the bad news.  Although the -0.2% decline in consumer prices in February means that real retail sales were flat, the big downward revision in January was in no way ameliorated: 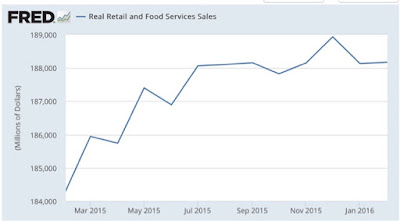 Worse, real retail sales per capita have been basically flat for 8 months, with a peak in December: 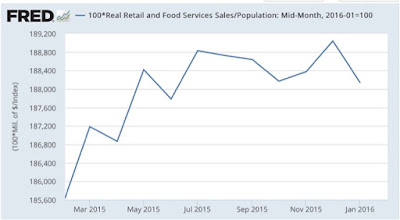 (note that population data isn't available for February yet, so the graph ends with January.)  This is a long leading indicator.

Just as bad, housing, which is perhaps the best of all long leading indicators, has also turned flat to negative.  No graphs yet, but neither permits nor starts made a new high.

Since the middle of last year, because of the NYC distortions, I have been looking at single family permits, and also permits excluding the Northeast in order to compensate.  Neither one of these made a new high, either, and both look flat for at least the last 4 months.

With a very long lag, 4th Quarter corporate profits will finally be reported as part of next week's final revision to Q4 GDP.  Should these not make a new high, which seems most likely, that would leave real money supply and the yield curve as the only two long leading indicators still giving positive results.

I am running out of positives.  At the moment there is no engine for growth.  Unless there is a quick jump-start to production and profits from the abating of US$ strength, or consumers finally spend much more of their gas savings, this does not bode well for 2017, and possibly Q4 of this year.
Posted by New Deal democrat at 11:30:00 AM