One of my pet peeves is analysis that relies too much on Year-over-year comparisons, as in "X is still YoY positive/negative."  If you do that, you are going to miss turning points, which happened sometime during that year - perhaps many months before the sign turned.

But one good use of YoY comparisons is to see if they are getting "less good/bad."  This will help you spot a change in trend.

A few analyses in the last several weeks noted an improvement in the YoY comparison in Industrial Production, and I also made mention of it in my last Weekly Indicators  column.  But let's take a little closer look, first at the long term: 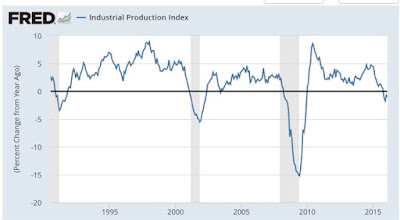 Here is a close-up of the lastl year: 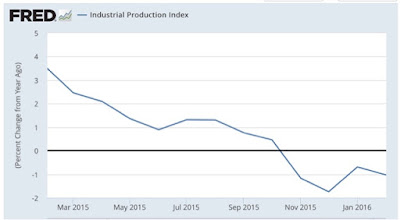 There have only been two months of "less worse" readings, and they are well within the range of noise.  I would like to see several more months of such improvement before I would be confident that the shallow industrial recession has bottomed -- although, with the recent decline in the US$, that is the more likely scenario.
Posted by New Deal democrat at 9:30:00 AM