At long last, the BEA has released corporate profits for Q4 2015.  Here's the bad news:

Corporate profits are a long leading indicator, and they have now turned negative for the second quarter in a row.  Usually proprietors' income (blue in the graph below), reported much more timely, tracks their direction well, but sometimes corporate profits (red) turn first - and in the 4th Quarter, that's what happened: 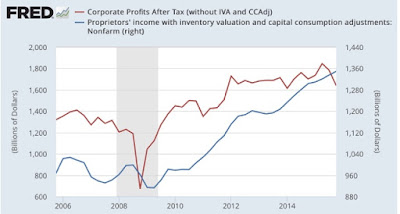 I'll be updating my look at all of the long leading indicators next week. Stay tuned ....

Note from Bonddad: this has been one of my biggest issues with the market for the last 6-12 months.  Both Zack's and Factset.com have documented a deteriorating revenue and earnings picture.  Just last week, I made the following observation in my weekly market commentary: