One of these business metrics is giving a false signal


The recent poor numbers on wholesaler and retailer inventories and sales stand in stark juxtaposition to the improvement in weekly reports of steel production, rail transport (until last week!), and consumer spending by the likes of Goldman Sachs and Gallup. The monthly numbers say deterioration, while the weekly numbers say improvement. 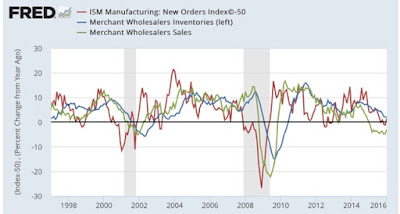 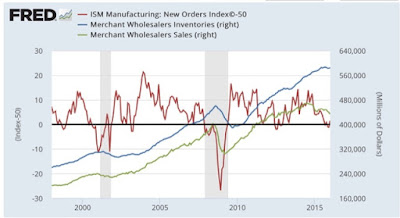 ISM new orders have show two months of slight improvement, while inventories are no better than flat, and sales continue to decline.

Now here is a close-up on the last several years of the first graph above: Inventories haven't really followed sales at all.  If this is an incipient recession, then I would expect inventories to follow sales, which means that ISM new orders are giving a false signal.  On the other hand, if this is simply a slowdown, like 1998 (far left in the first graph), then sales should turn positive, and like 1998 inventories will not decline, in which case it is elevated inventories that are giving the false signal.

Bottom line: either ISM new orders are falsely signaling optimism, or business inventory accumulation is falsely signaling pessimism.  A cause for optimism that the discrepancy will resolve to the upside is that the regional March Empire State, Philly, and as of this morning Richmond manufacturing indexes have all shown a positive spike in new orders.
Posted by New Deal democrat at 10:06:00 AM