I'm going to make this as easy as possible for the simply minds to understand.

1.) The US infrastructure is in terrible shape.

3.) For those of you who claim to be business savvy: in order to determine if an investment is worth it, we compare the rate of return to the cost of the project.  So, here's a chart of the difference between the 10 year CMT treasury and 10 year inflation adjusted CMT treasury: 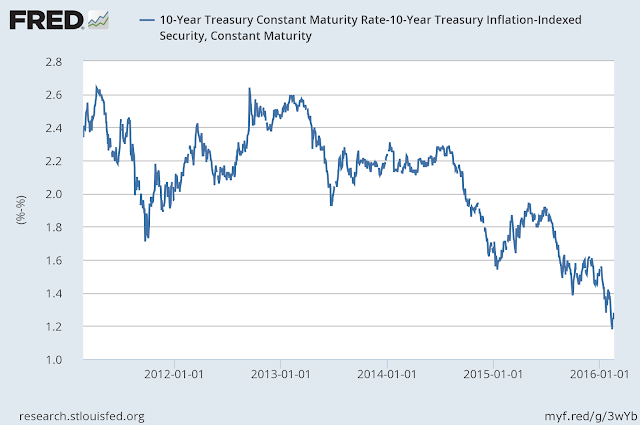 So, the cost of the project, at current rates, would be a little over 1.2%.  And, just to give us a margin of latitude, let's use the 10 year CMT-10 year inflation adjusted difference for the duration of the latest expansion.  Eyeballing the chart,  we get a ~2.2%.  That means that, over the life of the project, we need to make more than 2.2% on an annual basis.  That is, literally, the lowest financial bar to jump on planet earth.

[UPDATE]: As I mentioned below, I wrote this in a fit of early morning pique.  There would, of course, be additional costs.  But as most of those would be amortized over an extended period of time (as in 30-40 years minimum), the long-term economic rewards are still far higher than the cost.

4.) Let's use basic macro analysis for this.  Here is a aggregate level AS/AD model: 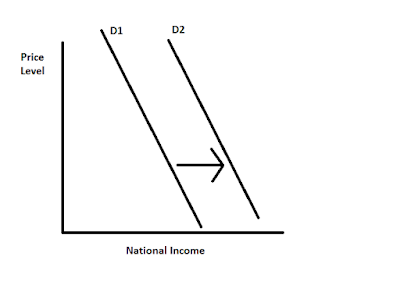 D1 and D2 are GDP (C+I+G+NX).  G=government spending.   The vertical axis is the price level and the horizontal access is total national income.  Borrowing money and spending it shifts the AD from D1-D2.

Actually, I realize that most stupid jackasses won't get this, largely because it involves thinking and a basic knowledge of econ and finance.  But our readers will get the idea.

[UPDATE]: Here's what started this rant: I read the following over on Marginal Revolution:

Yet governments do not wish, and that is what we must think more deeply about.  Not “why can’t central banks halt deflation?”  So if in a monetary policy or macroeconomic analysis you read the phrase “out of options,” you would do well to substitute in “governments do not wish to pursue their remaining options.”

First of all, he's entirely correct.  The whole, "we must freeze government spending" line of thought has turned into a massive cutting off of our collective noses to spite our face line of reasoning.   Making matters worse are the following points:

1) A large number of people advocating for this line of thought don't know thing one of economics. They always say they do.  But even a cursory analysis of not only their writing but their respective backgrounds indicates they either: didn't attend college, did attend college but don't have an economics background, or never worked in finance.   Yet for some reason, they think they can say, "it's all about supply and demand" and it's all OK.

2.) There is no economic model where this does not make sense.  By investing in infrastructure you're hiring a lot of people now who then build a number of public goods (roads, bridges, electrical infrastructure and the like) that increase efficiency and productivity over decades of time.  Simply look at my hometown of Houston, Texas.  Four of the major area of growth (Sugarland, Katy, Cypress and the Woodlands) are all on major highways, without which no meaningful growth would have occurred.  But with these highways in place, massive growth is occurring.   And it will continue to occur.

This is just such a no-brainer that the fact we're not even talking about it, let alone implementing it, just boggles the mind.