Caterpillar Is A Buy At These Levels

This is not a solicitation to buy or sell this security.  Do your own research and come to your own conclusions.  I own this.
According to Finviz.com, there are 14 companies in the farm and construction machinery sector.  With a $49 billion market cap, Caterpillar is the largest.  John Deere is a distant second with a total valuation of ~$29 billion.  Attesting to Cat's dominant position, the third and fourth largest companies are much smaller at $11.3 and $4.1 billion, respectively.  This industry faces a difficult international environment.  Not only is the strong dollar hurting competitiveness, the commodities super cycle is slowing, which lowers demand.  Domestically, durable goods orders have slowly decreased since mid-summer.  This challenging environment is a primary reason why most companies in this sector are trading at attractive levels.
Here is the weekly chart, going back three years 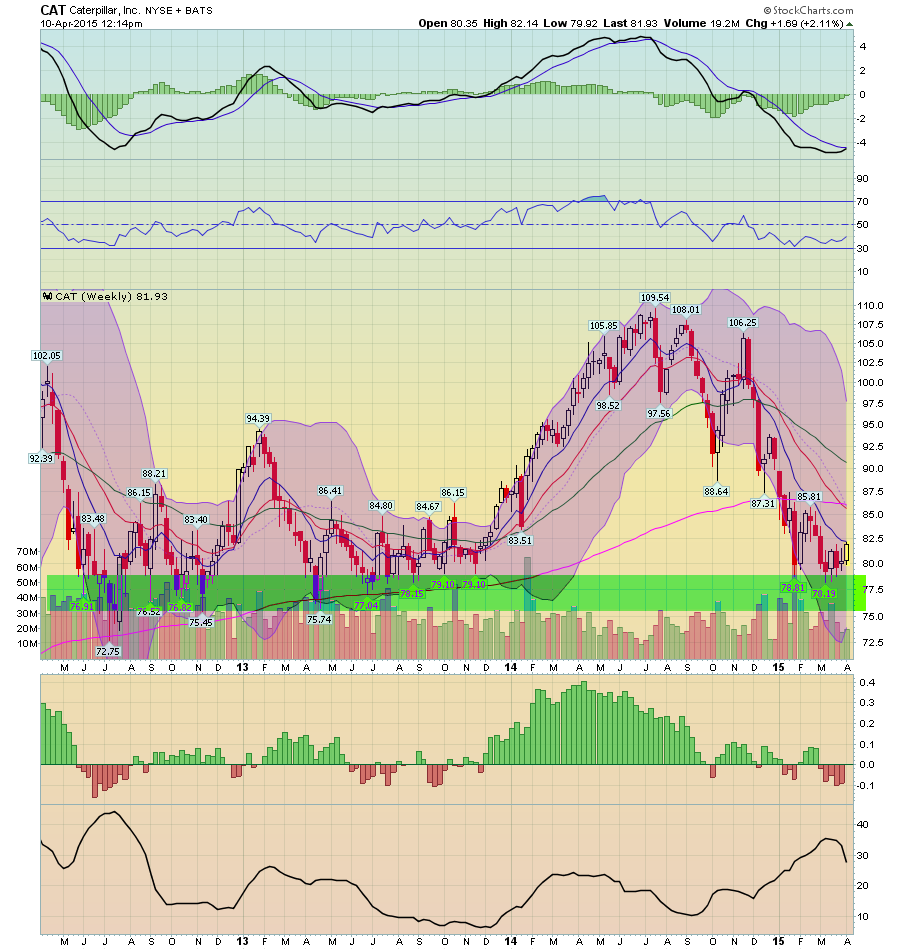 The stock has fallen about 30%, moving from the 109 level in mid-2014 to its current level in the lower 80s.  There is strong technical support at these levels from several years ago.  The chart may have formed a double bottom in 1Q14.  Finally, the low reading of the MACD implies a move higher is possible.
Here is a table from Morningstar of the relevant valuation metrics: 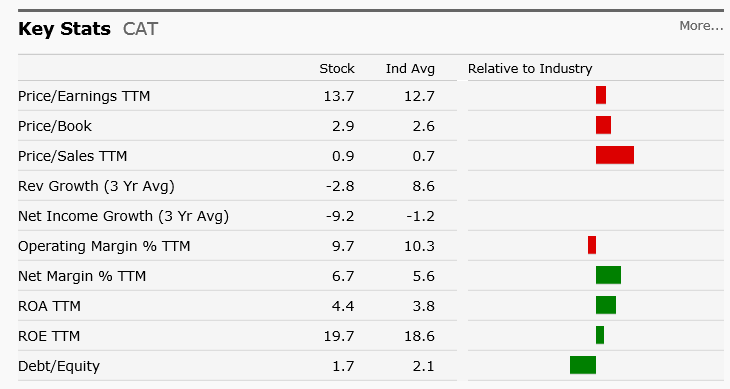 On a PE basis, the company is slightly overvalued relative to the industry.  Supporting this is the slightly better than average return on assets and equity.  However, the company’s growth is less than the industry average.  Although the company is pretty fairly valued, its dominant industry position warrants a better than average PE.
Caterpillar’s balance sheet shows the company is financially well managed.  Receivables decreased from 26% of assets in 2010 to 19% in 2014.  Although the receivables turnover ratio has increased from 2.77 in 2010 to 3.25 in 2014, the size of the increase is statistically meaningless.  Inventory increased from 14%/assets in 2010 to 17% in 2012, but returned to 14% over last two years.  Since 2010, inventory turnover has slightly increased, moving from 95.84 to 113.95.  However, these increases in inventory are very small and don’t detract from the company’s overall attractiveness.  The current ratio is 1.39, indicating the company has ample liquidity.  Finally, long term debt is a conservative 32% of liabilities.  With well-managed receivables and inventory accounts along with a conservative debt structure, Caterpillar’s balance sheet should appeal to any conservative investor.
The company’s income statement, however, could be better.  The biggest problem is the two year drop in top line revenue, from $65.9 billion in 2012 to $55.1 billion in 2014.  While the COGS percentage has been stable for the last five years, there has been a 2% increase in SGA expenses, leading to a 2% drop in the net margin over the same period.  The dividend payout ratio of 44% firmly supports current dividend levels.  Perhaps most importantly, the interest coverage ratio stands at 12.79, indicating the company’s debt load is anything but a problem.
And finally, we turn to the cash slow statement, which dividend investors should cheer.  The company has been cash flow positive for the last five years.  With the exception of 2012, the dividend was funded entirely from operations.  The company has the option of ending a stock buyback program (which totaled $4.2 billion in 2012) to protect future dividend payments if necessary.  And with operations investments steady between $1.7 and $1.9 billion for the last three years, there is little reason to think any major change in dividend policy is on the horizon.
Given the low interest rate environment, Cat’s 3.35% dividend yield is very attractive.  Their financial condition is solid, meaning there is little reason to see a cut in the near future.  The current price level, which is near the lowest of the last three years, is attractive from a long-term investment perspective.  Adding all these factors up, Cat is a buy at these levels.
Posted by Unknown at 11:23:00 AM