What's the culprit behind recent retail sales and jobs weakness?

What is behind the recent slowdown in so much economic data?  Candidates include the weak global economy and the related strong dollar, the West Coast ports strike, and unusually poor winter weather, among others. The issue is important because, while winter has given way to spring, and the ports dispute has been settled, the Oil patch weakness is continuing and may even intensify.

Breaking the reports down on a state by state basis helps us determine which of the potential issues was the primary driver of the data.  To cut to the chase, it looks like Oil patch weakness is the prime ingredient in the punk March jobs report, although weather may have played a supporting role.  By contrast, weather appears to have been the primary culprit in hiring in February, and poor retail sales in January.  We will get further information on these later this month, with state-by-state breakdowns in the unemployment rate, and state revenue reports for March, which will reflect actual retail sales in February.

Ironman at Political Calculations offers supporting data that the March employment report reflected a particularly bad month in the Oil patch.  As I pointed out the other day, there was a big increase to over 300,000  during the weeks ending February 7, 21, and 28.  He shows us this graph of how much of that increase can be traced to the 9 states most impacted by fracking: 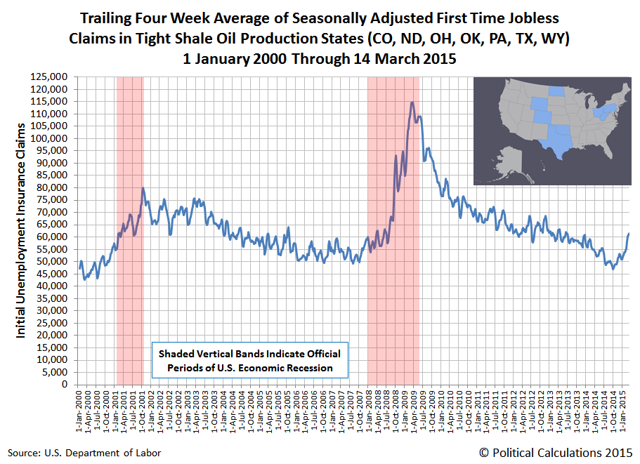 Note that the big increase starts in February, increasing to 15,000 per week. This showed up in the March employment report, which of course nets hires and fires.

Meanwhile, on Tuesday we got the JOLTS data for February.  Here is Doug Short's graph of the monthly numbers and 6 month moving averages for openings, hires, and discharges:

Note that, through February, there has been virtually no upward movement in discharges.  what has changed is that, while job openings are growing at an increased pace since early 2014, the growth in actual hires, which had accelerated even more than openings, has decelerated in the last few months.

This suggests that, through February, the Oil patch and the West Coast ports strike, which would have increased discharges, were not significant.  That conclusion is buttressed when we look at the breakdown of openings and hires broken out by job sector: 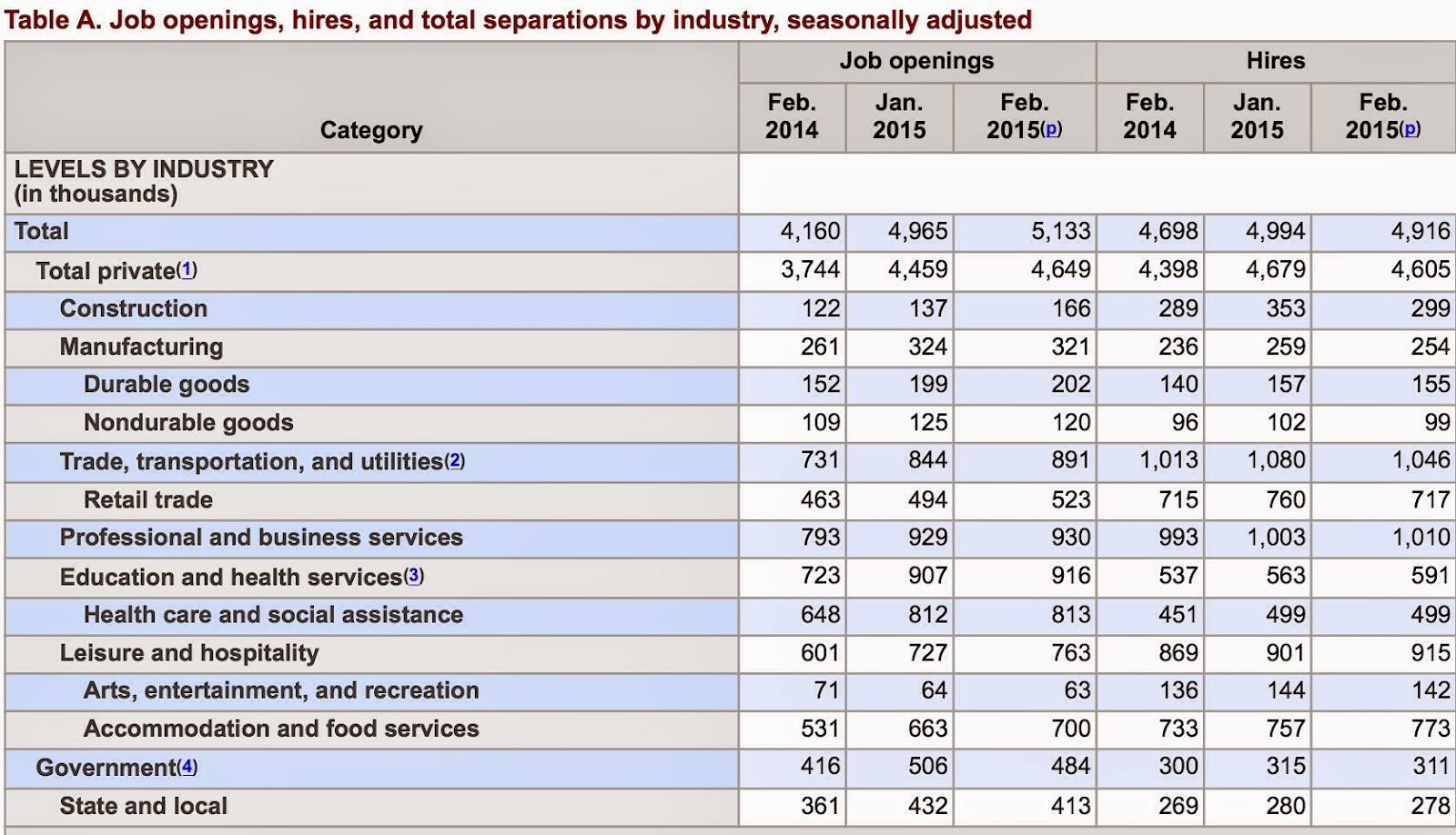 Note that openings in February increased vs. January in virtually all job sectors.  Meanwhile, hires for those openings decreased in virtually all job sectors, although the biggest percentage decrease was in construction (which is where we  would expect the Oil patch weakness to be most felt.  In other words, while Oil patch weakness played a role, the primary driver of hiring softness in February was probably the weather, since almost all job types were affected.

Finally, there is the anomalous decline in retail sales, which has happened in the face of a big increase in real personal income due to savings on gas purchases.  Thus it is hard to assign this to importing global weakness or concentrated declines in the Oil patch.

And looking at reports of state tax revenues appears to confirm that weather is the big culprit behind the recent weakness in retail sales.  Below is a chart of reports through February of sales tax revenues (recall the businesses typically pay sales tax receipts in the month after the goods or services are sold, so the February reports are primarily January sales):


If the West Coast ports strike was the big culprit, California should be faring the worst.  Instead in February it reported a large YoY increase.

If the Oil patch were the primary driver, Texas should be faring poorly.  Instead Texas also reported large YoY gains in February.

But look at the northeast, especially New York.  Alone among all states, New York reported an actual YoY decline in February. New Jersey and Massachusetts also saw declines in positive comparisons between January and February, and even Virginia saw a similar decline.  Georgia was unaffected.

The slew of winter snowstorms that broke Boston's record of annual snowfall started at the end of January.  New York City, for the first time in over 100 years, shut down its subway system due to a (blown) blizzard forecast, which even at the time was estimated to cost in excess of $750 Million in revenue.

The Fed's Beige Book also points to weather as the main culprit in February.  Here are a sample of the observations:

New York District:  [some] contacts say that early 2015 sales continued the positive trajectory in place by the end of 2014, but business dropped off noticeably in late January, when the first of four (to date) significant winter storms hit. One retailer reports that over the last month, about 200 of their stores based in New England had been closed for a few days because of the severe weather

Retail sales have improved somewhat, on balance, since the last report. A major general merchandise chain indicates that sales were up strongly from a year ago and also above plan in January but slowed a bit and were on plan in the first half of February. Similarly, a major retail contact in upstate New York describes January as a solid month and February as fairly strong. In both cases, harsh winter weather was said to have hindered business somewhat. In general, retailers report that inventories are in good shape and that discounting remains prevalent.

Philadelphia: A Pennsylvania contact described sales levels throughout the state as being strong overall through mid-February despite the typically softer seasonal levels. New Jersey contacts reported strong statewide sales for January; however, weather was taking a toll on early February sales. Auto dealers expect growth to continue in 2015 as it had in 2014.

Richmond:  Retail activity slowed in the weeks since our previous report. Sales of cars and light trucks were generally flat, according to dealers in Virginia, North Carolina, and South Carolina. A dealer in the eastern panhandle of West Virginia reported slightly slower sales. Grocery and convenience stores reported a decline in food sales in in the past month. According to the manager at a Virginia chain of discount stores, holiday and post-holiday sales were softer than expected, but still higher than a year ago.

Kansas City:  Consumer spending activity was flat in January and early February, but remained higher than a year ago with solid expectations for the coming months. Retail sales declined from the previous survey but were around year-ago levels. Several retailers noted a drop in sales of luxury products, although sales of winter and lower-priced items were steady.

Dallas:  Retail sales rose during the reporting period, but the pace of growth was mixed. Demand continued to be up year over year, and a few retailers noted slight improvement in foot traffic since the last report. Two national retailers said Texas' sales performance was in line with the nation overall, while a third national retailer noted Texas was outperforming the national average. Outlooks were positive, and contacts expect modest sales growth over the next three months.

San Francisco:  Overall retail sales activity grew moderately during the reporting period....  Merchants in some areas showed very strong holiday sales and would have seen even larger volumes if not for delays receiving merchandise caused by labor disputes at West Coast ports. In other regions, holiday sales were not quite as strong as expected, and, as a result, retailers in those areas still have a little excess inventory.

The beige book shows that, with the exception of Kansas City, all of the slowing was in the Northeast and Mid-Atlantic.  Meanwhile, Texas was strong, and the only impact of the West Coast ports strike in California was a decline in inventory, not sales.

To summarize:
I will update this once we get further information by the end of this month.