As I have already written, there are increasing signs that the increase in interest rates and the death of mortgage refinancing are beginning to eat into consumer purchases.  Specifically, growth is flagging as to both the two biggest assets owned by families:  houses and cars.

I have been sounding the alarm about decelerating housing for awhile, but now this may also have spread to vehicles as well.  I say “may” because typically vehicle sales plateau at some point in expansions – but in the last expansion vehicle sales plateaued at a level 1,000,000 vehicles per year above the maximum number sold on an annual basis in 2013.

Below is a graph (averaged quarterly to cut down on noise) of  the YoY% growth in housing permits (blue) and auto sales (green), compared with GDP (red) for the last 30 years: 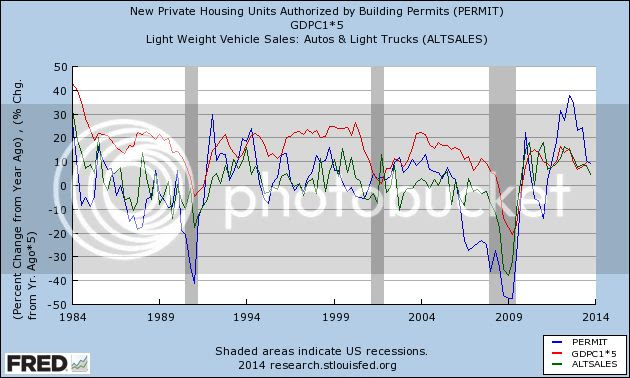 Now here is the same data for the last two years, but monthly better to show up the recent trend: 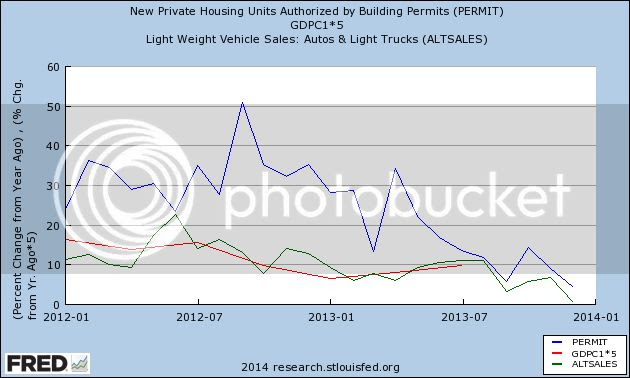 Note that, measured quarterly, both houses and cars are selling at a level of YoY growth that is very strong compared with the last 30 years, even though there has been a significant decline in that rate of growth.  At the same time, when we look at the trend on a monthly basis, both housing and cars look set to turn negative by the end of the first quarter.

That housing and cars are showing relative weakness may not sound like a big deal.  Until you remember a paper presented by UCSD economist Edward Leamer at Jackson Hole in 2007, Housing and the Business Cycle, in which he said:

We have experienced 8 recessions preceded by substantial problems in housing and consumer durables....
....
Residential investment consistently and substantially contribute[d] to weakness [in GDP growth] before [these 8] recessions....
....
After residential investment as a contributor to prior weakness come consumer durables, consumer services, and then consumer nondurables.  Those are all consumer spending items -- it's weakness in consumer spending that is a symptom of an oncoming recession....  The timing is: homes, durables, nondurables, and services.  Housing is the biggest problem in the year before a recession... durables is the biggest problem during the recession [although consumer durables declined even more than housing before 2 of the 10 post World War II recessions]

The same interest rate or other variables [mainly employment] drive both the housing cycle and the durables cycle....  It turns out that much of the amplitude in consumer durables comes from vehicles not furniture

If you look at the first graph above, you'll see at least 3 occasions that were "false alarms."  Both houses and car sales turned negative YoY in 1987, 1994, and 1996 without any recession ensuing.  But they did turn negative significantly before all three of the last recessions, including the 2007-09 recession that was just about to begin when Leamer gave his presentation at Jackson Hole.

Leamer said that on average housing's relative contribution to GDP turned down about 5 quarters before the onset of a recession, followed several quarters later by cars. *If* the present trend continues, there is an excellent chance that housing and cars will be negative by mid-2014.
Posted by New Deal democrat at 8:00:00 AM