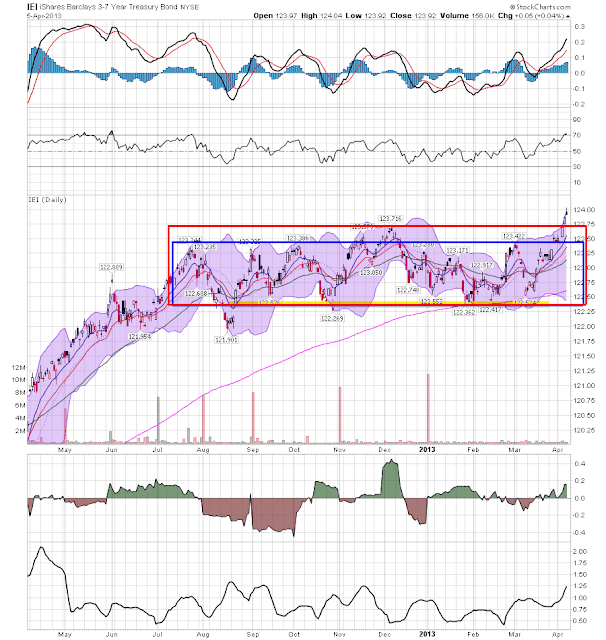 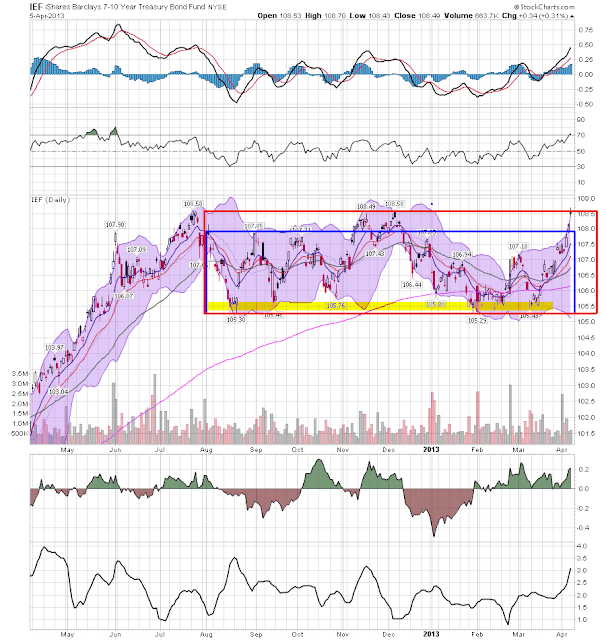 Let's turn to the longer end of the market: 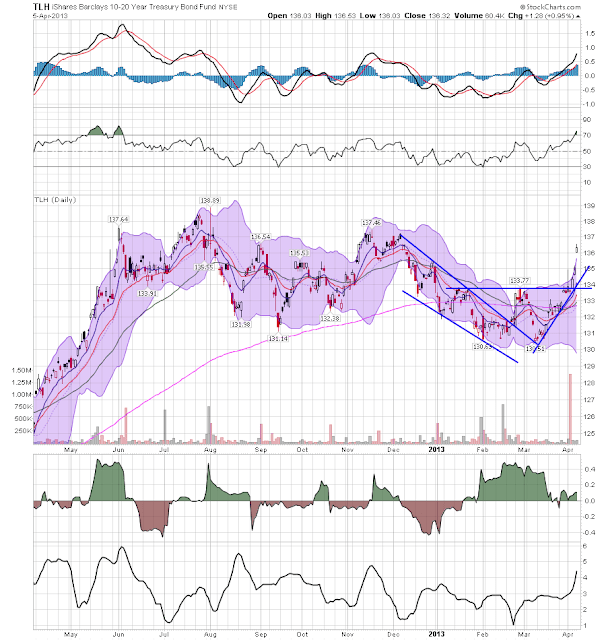 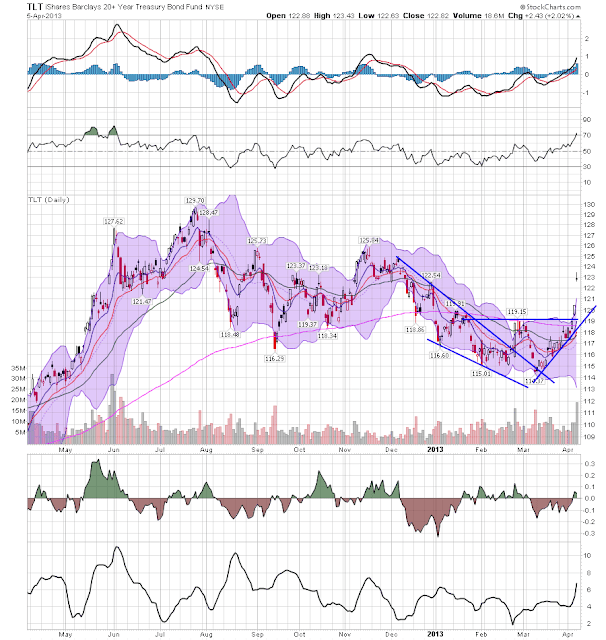 Both the TLHs (10-20 year treasuries) and TLTs (20+ years treasuries) have similar charts.  Since the beginning of December last year, both traded in downward sloping triangle patterns. We see both moving through the 200 day EMA in late February and then selling off.  However, both also caught a strong bid last week.

Let's look at some of the reasons for last week's rally:

First, there was a surprise slowing in the ISM reading:

Treasurys rose on Monday, the first day of trading after the long holiday weekend in the U.S., as the ISM manufacturing survey posted a surprise decline in March.


...
The ISM Index fell to 51.3% last month, the lowest pace of manufacturing expansion since December, compared with February’s 54.2%. Any level above 50% signals expansion. Economists polled by MarketWatch had expected the index to remain unchanged.

“The miss is a pretty drastic one,” said Rogan. “Still showing a growth in the industry but if you look at this number, the momentum is certainly slowing down,” he said.

"The PMI™ registered 51.3 percent, a decrease of 2.9 percentage points from February's reading of 54.2 percent, indicating expansion in manufacturing for the fourth consecutive month, but at a slower rate. Both the New Orders and Production Indexes reflected growth in March compared to February, albeit at slower rates, registering 51.4 and 52.2 percent, respectively. The Employment Index registered 54.2, an increase of 1.6 percentage points compared to February's reading of 52.6 percent. The Prices Index decreased 7 percentage points to 54.5, and the list of commodities up in price reflected far fewer items than in February. In addition, the Backlog of Orders, Exports and Imports Indexes all grew in March."

Of the 18 manufacturing industries, 14 are reporting growth in March ...

There  is a breadth to the decline -- which occurred at the macro level and the new orders and production sub-indexes that is concerning.  However, it's only one month of data.

There was also the slower ADP jobs data and weaker ISM Services reading on Wednesday:

Lower-than-expected growth in private-sector payrolls and a decline in a U.S. service-sector gauge led to gains in Treasurys on Wednesday.


The U.S. economy added 158,000 private-sector jobs in March, well below economist estimates of 215,000 jobs, according to data from Automatic Data Processing Inc. The monthly gain was the smallest since October.

The ISM services index for March fell to 54.4% from February’s 12-month high of 56%, showing a relatively slower pace of business expansion. Economists polled by MarketWatch expected a decline to 55.8%.

Here's the press release from the ADP data:

Private sector employment increased by 158,000 jobs from February to March, according to the March ADP National Employment Report®, which is produced by ADP®, a leading provider of human capital management solutions, in collaboration with Moody’s Analytics. The report, which is derived from ADP’s actual payroll data, measures the change in total nonfarm private employment each month on a seasonally-adjusted basis. Revisions to job gains in the two prior months were offsetting; February’s gain of 198,000 jobs was revised up by 39,000 to 237,000, and January’s 215,000 gain was revised down by 38,000 to 177,000.

And the accompanying chart of the data: 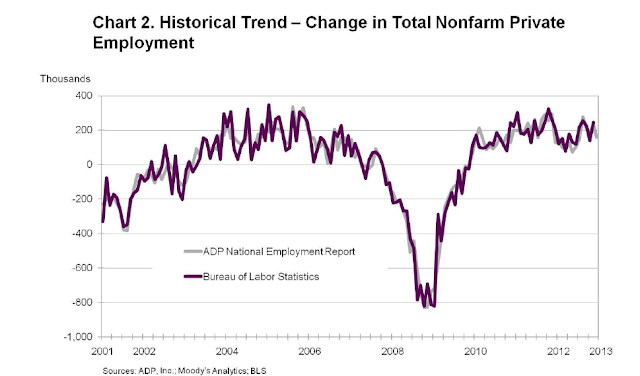 Then there is the ISM services data:

While the macro level number's drop could be attributed to statistical noise (it only dropped 1.6%), the internal drop in the new orders index and employment index were pretty steep.  In addition, the drop in new orders usually means lower ISM readings in the coming months.

Finally, we had weak employment news on Thursday and Friday (which we detailed here, here and here.  But also see NDDs positive comments here).

Remember that on the other side of rising treasury prices are declining treasury yields.  With CPI at 2% right now treasuries are a losing trade without capital appreciation, where limits the profit potential in anything beyond a short term trade.
Posted by Unknown at 6:00:00 AM