On March 14th, I posted a story titled, "Is It Time to Short Canada?"  Since then, the Canadian ETF has broken long-term support.  There have also been a few economic releases that should be highlighted.

First, the annual percentage rate change in GDP has been declining for teh last two quarters, essentially being cut in half.  In addition, consider this chart of Canadian GDP from the latest Canadian GDP report: 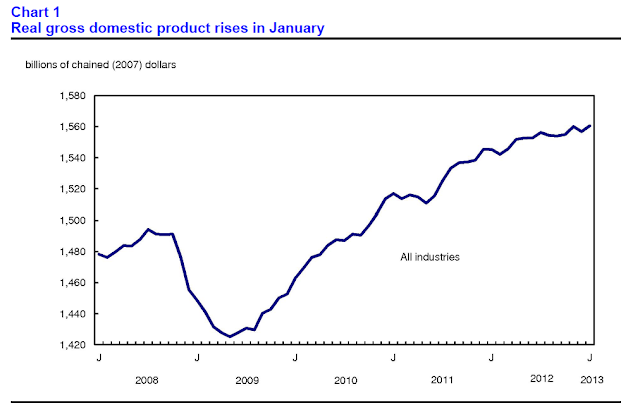 Notice that the trajectory of the increase has been decreasing, collaborating the slowing in growth.  Let's get a bit more detail about GDP growth: First, at the macro level the pace of month to month growth has been negative in three of the last six months.  Manufacturing has contracted at that pace as well.  And the service sector is barely growing at all over that period.

Following an increase the previous month, employment declined by 55,000 in March, all in full time. The unemployment rate rose 0.2 percentage points to 7.2%.

Despite the decline in March, employment was 1.2% or 203,000 above the level of 12 months earlier, with the increase mainly in full-time work. Over the same period, the total number of hours worked also rose by 1.2%.

The chart above is for the Canadian unemployment rate.  Although it declined from early 2009 to late 2011, it has held steady over 7% for the last two years.

The above chart shows Canadian employment.  While the number has been increasing since early 2009, we've seen a few contractions over the last 6 months.  Going back to last summer, we see a leveling off and an additional month of contraction.

Now let's turn to the chart of the Canadian ETF: 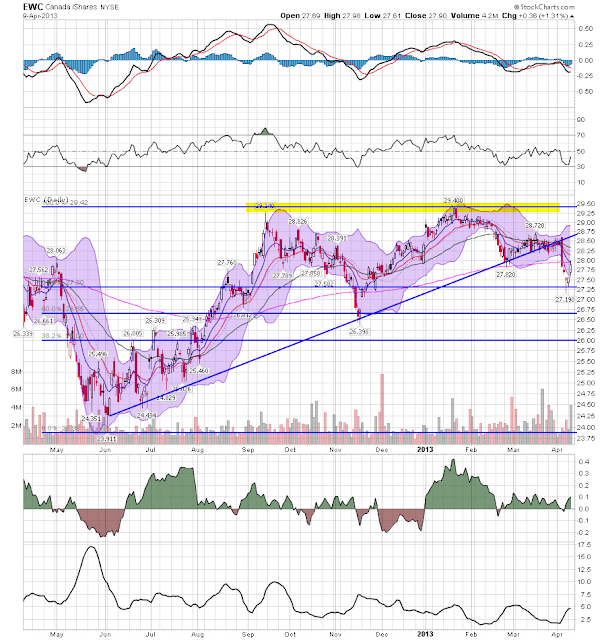 Prices broke the long-term trend line last week in a big way, printing a strong bar.  Since the, prices have dropped below the 200 day EMA, the 38.2% Fib level and all the shorter EMAs.  Since then, prices have rebounded, but are still below all the EMAs.  Also notice that the MACD has given a sell-signal.  Also note the overall declining MACD reading, with the gradually decreasing peaks in September, February and April.