The French ETF is looking more and more like a great short opportunity.  As I first noted a little over a week ago, the French economy is in terrible shape: GDP has barely grown for the last 7 quarters, unemployment is rising, industrial production is dropping and the budget and current account deficits are increasing.

Now we have more data from Markit, indicating the services downturn is worsening:

The downturn in the French service sector deepened in March. Business activity fell at the fastest rate since February 2009, reflecting a similarly marked drop in incoming new work. Backlogs of work decreased at an accelerated pace, but the rate of job losses moderated slightly. Companies reduced their charges further in a bid to stimulate new business, whereas input costs continued to rise at a solid pace. Future expectations dropped into negative territory for the first time in five months.

And the manufacturing sector isn't doing much better:

Operating conditions in the French manufacturing sector continued to worsen in March. Although the headline Purchasing Managers’ Index® (PMI®) – a seasonally adjusted index designed to measure the performance of the manufacturing economy – inched up to a three-month high of 44.0, from 43.9 in February, it continued to signal a marked rate of deterioration. The average reading for the PMI over the first quarter of 2013 (43.6) was the lowest since Q2 2009 (43.1).

And  consider this chart of industrial production released earlier this weeK 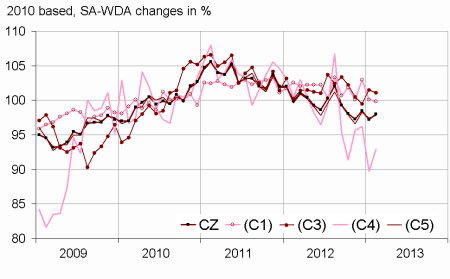 The central tendency of manufacturing as a whole (CZ) and the various sub-components is down.  Here's the money quote from the report:

And a new report from the EU highlights that lack of reform progress from the new French government:

Brussels turned up the pressure on the French government to overhaul the country’s sputtering economy more quickly, issuing a stinging report on Wednesday that argues President François Hollande’s reform efforts thus far have been insufficient to restore the country’s competitiveness.
The report, one of 13 issued on the EU’s most troubled countries outside the four in full-scale bailouts, warned that France’s shrinking share of global exports and diminishing growth prospects are likely to continue unless more is done to make the country’s labour market more flexible.

In addition, it warns that France’s increasing sovereign debt levels, which are expected to rise to 93.8 per cent of economic output next year, are not only choking off growth prospects but are threatening the country’s banking system and the broader European economy. 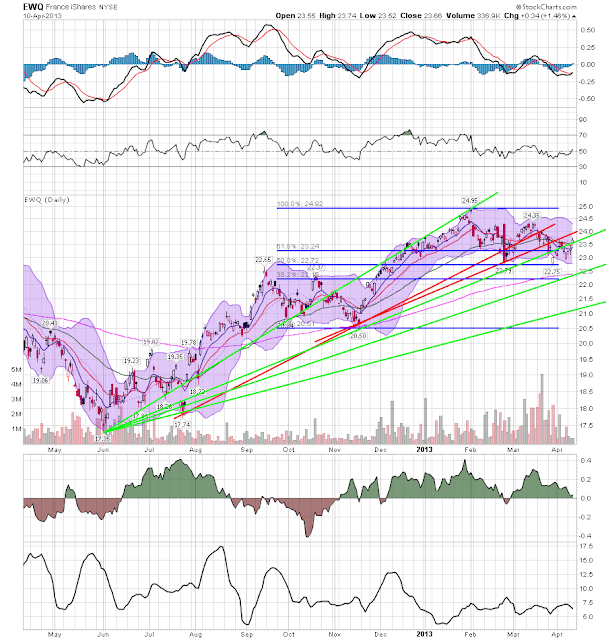 First, note the two red lines that represent the upward sloping trendline of several rallies.  Prices have broken both.  Secondly,  prices have fallen to the first   Fibonacci fan and are holding on barely.  They're also right at the Fib retracemement levels from the November to early February rally.  We also see the MACD declining.  However, there is a positive cash inflow. 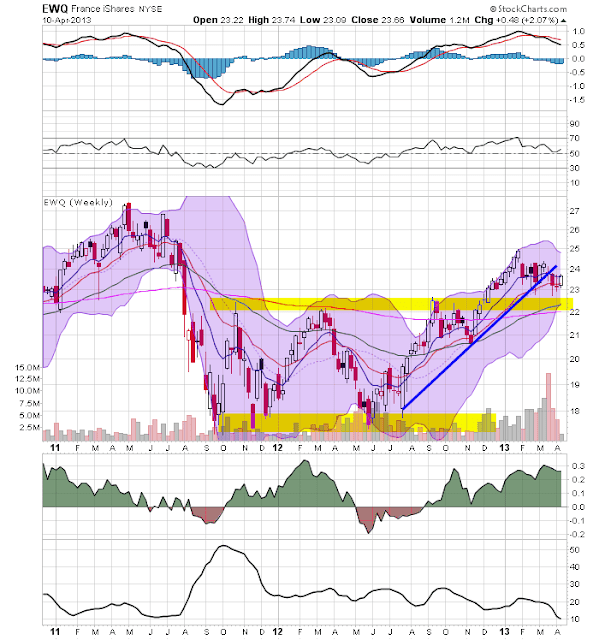 On the weekly chart we also see a trend break from the rally that started last summer.  Prices are declining in a disciplined, downward sloping triangle on declining momentum.  The price level of ~22.5 established on three separate rallies is providing technical support for the sell-off right now.