Last week, the Fed published the Fed Minutes from the September 12-13 meeting.  These provide a near real-time assessment of the US economy and is especially important considering the concern on this blog about a possible recession.  So, let's take a look at what the Fed said:

Private nonfarm employment increased in July and August at only a slightly faster pace than in the second quarter, and the rate of decline in government employment eased somewhat. The unemployment rate was 8.1 percent in August, just a bit lower than its average during the first half of the year, and the labor force participation rate edged down further. The share of workers employed part time for economic reasons remained large, and the rate of long-duration unemployment continued to be high. Indicators of job openings and firms' hiring plans were little changed, on balance, and initial claims for unemployment insurance were essentially flat over the intermeeting period.

This was covered last week in several places on the blog -- see here and here.  I believe that the weak employment numbers were a primary reason for the Fed adding mortgage back securities to its asset purchase program.  In short, although we had a better than expected report last week, this is still the Achilles heel of the economy.

Manufacturing production increased at a faster pace in July than in the second quarter, and the rate of manufacturing capacity utilization rose slightly. However, automakers' schedules indicated that the pace of motor vehicle assemblies would be somewhat lower in the coming months than it was in July, and broader indicators of manufacturing activity, such as the diffusion indexes of new orders from the national and regional manufacturing surveys, generally remained quite muted in recent months at levels consistent with only meager gains in factory output in the near term.

Manufacturing is clearly slowing.  While the US economy has enough domestic demand to keep the industry afloat, the weakness abroad in China and the EU is a big reason for continuing concern regarding manufacturing.  See here for the latest ISM update.

Following a couple of months when real personal consumption expenditures (PCE) were roughly flat, spending increased in July, and the gains were fairly widespread across categories of consumer goods and services. Incoming data on factors that tend to support household spending were somewhat mixed. Real disposable incomes increased solidly in July, boosted in part by lower energy prices. The continued rise in house values through July, and the increase in equity prices during the intermeeting period, suggested that households' net worth may have improved a little in recent months. However, consumer sentiment remained more downbeat in August than earlier in the year.

Let's take a look at the charts here: 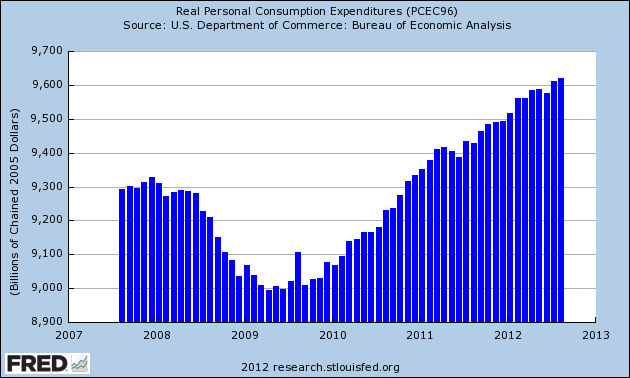 Overall, real PCEs are still increasing.  While they stalled for a five month period two months ago, the last two months have seen increases. 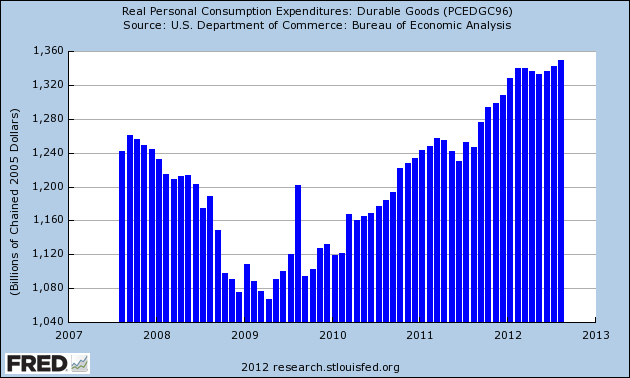 Durables goods purchases account for the smallest percentage of PCEs, but they have the largest importance.  An increase in these tells us that consumers are at least confident enough in the future to sign for the financing typically associated with these goods.  The last three months have seen increases in this area. 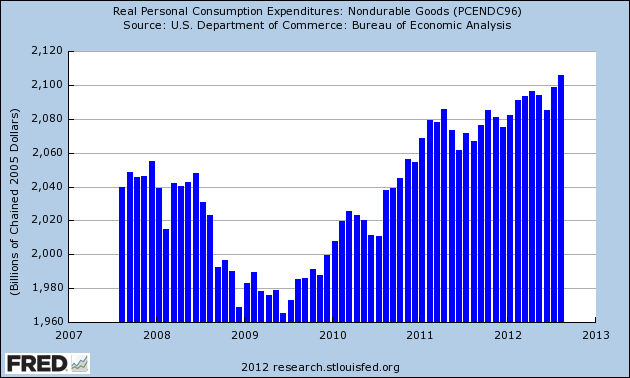 Non-durable goods purchases have bumped higher over the last two months, but these have, in general, been lack-luster for most of the expansion. 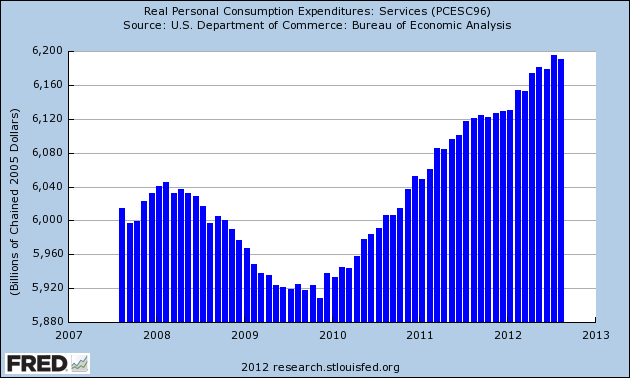 This PCE section accounts for the largest percentage of PCEs.  Notice that overall trend is still higher.  Over the last five months, the number has moved higher at an overall slower pace, but it is still moving up.

Housing market conditions continued to improve, but construction activity was still at a low level, reflecting the restraint imposed by the substantial inventory of foreclosed and distressed properties and by tight credit standards for mortgage loans. Starts of new single-family homes declined in July, but permits increased, which pointed to further gains in single-family construction in the coming months. Both starts and permits for new multifamily units rose in July. Home prices increased for the sixth consecutive month in July, and sales of both new and existing homes also rose.

This has been a bright spot over the last six months.  Let's take a look at some graphs, courtesy of Calculated Risk: 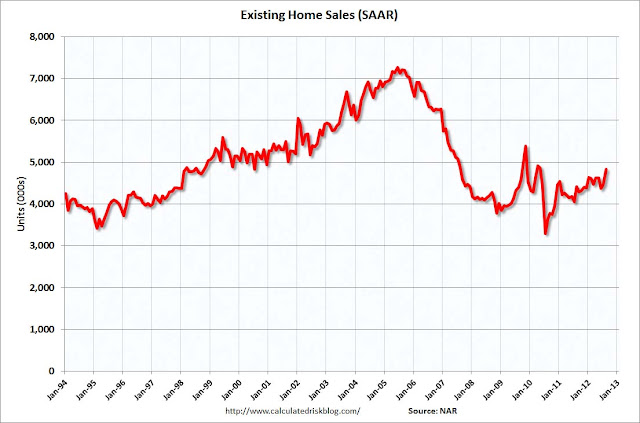 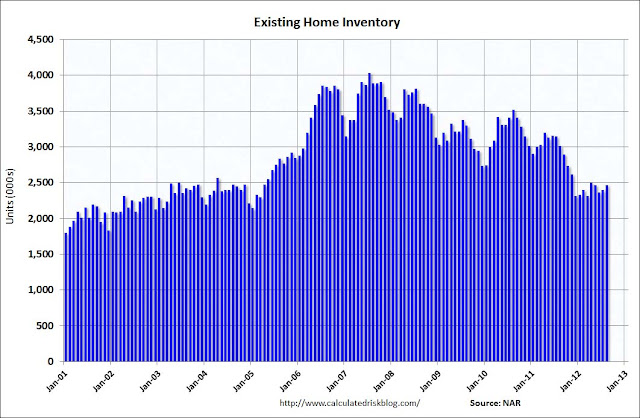 Total existing home sales have been steady at low levels for most of this expansion, but have bumped higher over the last 3-6 months.  In addition, the inventory situation is far better, telling us that supply has been dwindling. 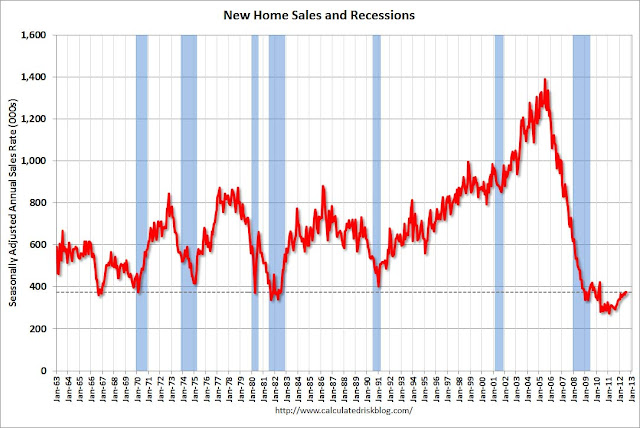 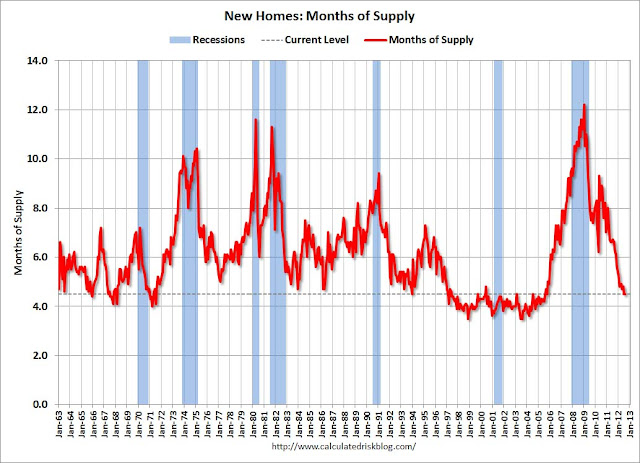 The top chart shows that new homes sales have come off of historically low levels and are now showing a bit of life.  More importantly, the inventory of new homes available for sale is now at extraordinarily low levels. 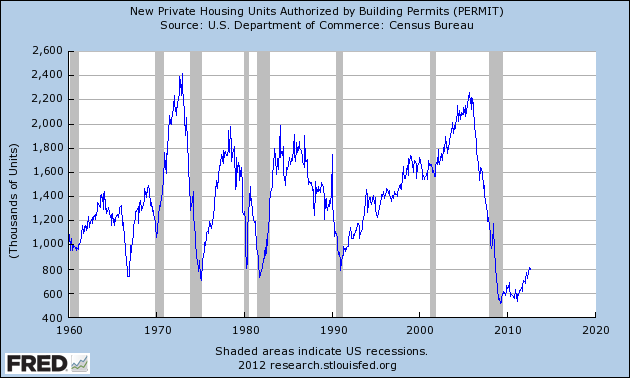 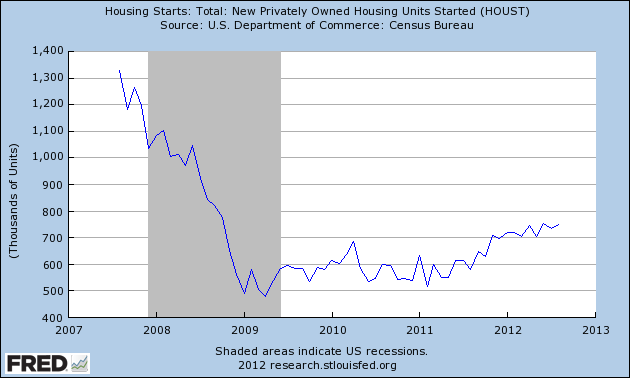 The top chart shows that building permits have moved higher at a good rate -- especially considering where they came from.  The bottom chart shows housing starts.  While we have seen improvement, these figures are still at low levels. 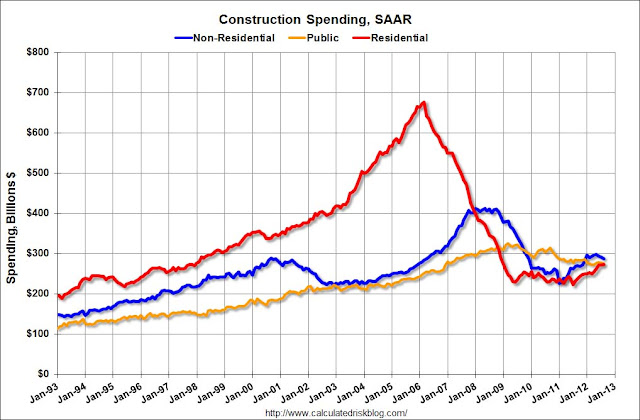 Construction spending in the residential area spiked during the housing bubble and has since fallen.  Over the last year, we've seen a gradual increase in both residential and non-residential.  Also note the decrease in public investment, which has hurt the recovery.

Real business expenditures on equipment and software appeared to be decelerating. Both nominal shipments and new orders for nondefense capital goods excluding aircraft declined in July, and the backlog of unfilled orders decreased. Other forward-looking indicators, such as downbeat readings from surveys of business conditions and capital spending plans, also pointed toward only muted increases in real expenditures for business equipment in the near term. Nominal business spending for new nonresidential construction declined in July after only edging up in the second quarter. Inventories in most industries looked to be roughly aligned with sales in recent months.

This has been partially dealt with in the manufacturing segment -- durable goods orders have seen a decline -- and a 1.3% drop (sans transportation) in the latest order.  However, this is after a good run-up in investment, as evidenced in this chart: 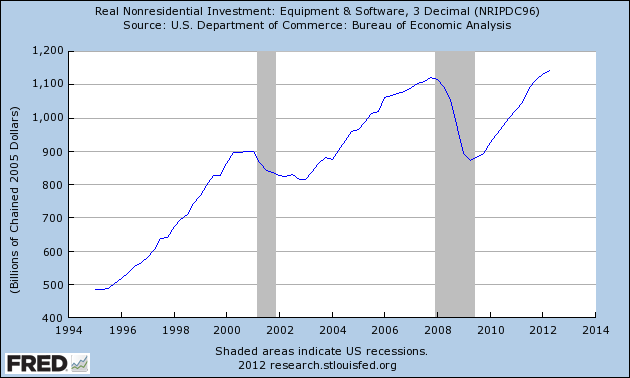 Business investment in equipment and software has been strong, rising slightly above pre-recession levels.

What all of this data shows is that we're in the same place we've been in for a few years -- painfully slow growth.
Posted by Unknown at 10:00:00 AM