So -- Who Is Really Spending More?

There's been a pretty big debate about whether or not the administration is the most spendthrift administration in the world, universe, or galaxy.  What started this off was an article by Rex Nutting over at Marketwatch titled, Obama Spending Binge Never Happened.  After that, the predictable sources chimed in in predictable ways.  So, let's do what we always do, which is look at the data. 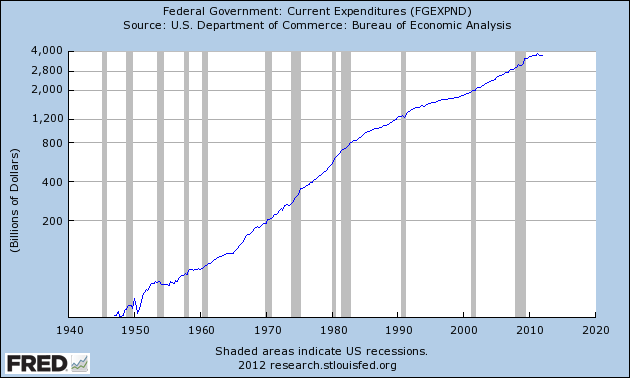 Above is a chart of federal government expenditures in logarithmic format.  This data makes very clear that no one is immune to the charges of too much spending; instead we see that regardless of who is in power in the White House or Congress -- or whatever permutation/combination thereof -- spending increases.  In actuality, this is to be expected.  Government spending is a component of overall GDP; as GDP increases, government spending would also increase. 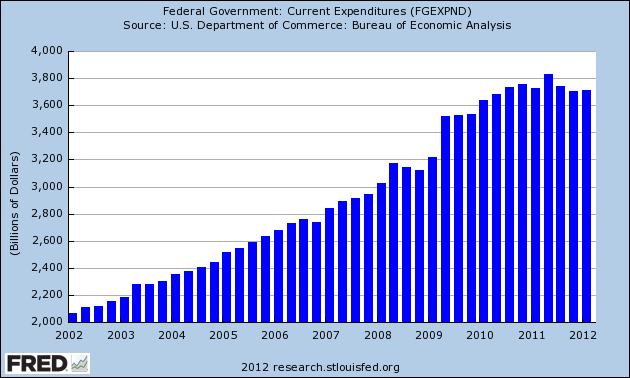 Looking at the most recent data, we see a large bump from about $3.2 trillion to about $3.5 trillion at the beginning of fiscal 2010.  This would have been the stimulus.  However notice that after that big bump, there is a leveling out, especially over the last 8 quarters.  Currently, we see spending at about the $3.7 trillion level, indicating an increase of about $200,000 billion over two years.  This really isn't that much in a $15 trillion dollar economy. 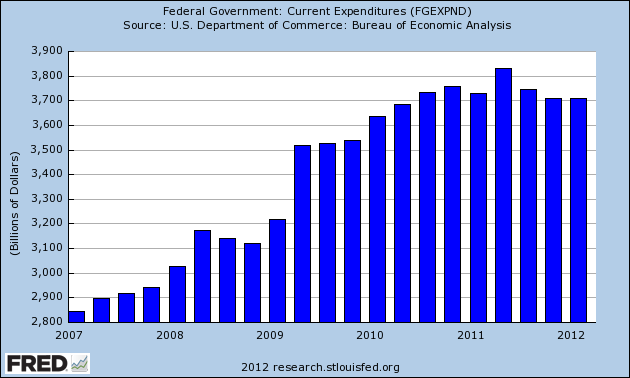 The above chart is a 5 year chart of total government expenditures, which shows the spending in a bit more detail.

So, what we see is stimulus spending increasing total government spending.  But then we see a leveling off of that spending after the stimulus was enacted.

Let's look at a few more data points.  The following charts from the data collected by the CBO on their historical data page. 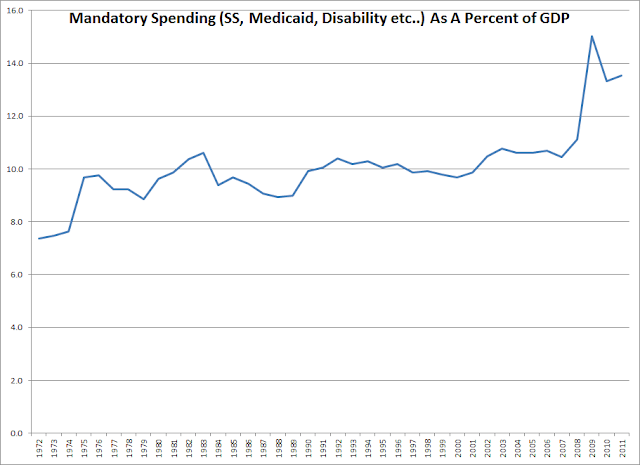 Also of consideration is the retiring of the baby boomers, which has led to increased payouts from Social Security.  These increased from 4.2% of GDP in 2007 to 4.8% of GDP in 2011.

Finally, let's look at the other side of the equation: taxes: 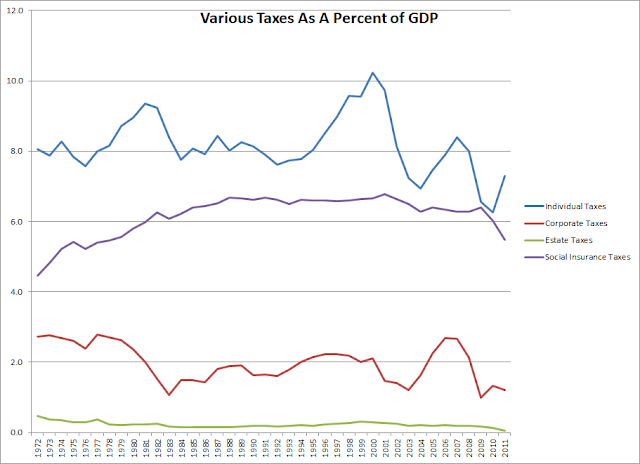 Above is a chart that shows tax revenue as a percentage of GDP for various taxes.  This chart shows some very interesting data.

1.) The estate tax has been a minimal component of total tax revenue of the US government.

2.) Despite claims that the US corporate tax rate is one of the highest in the world (which is technically accurate, but in fact a gross oversimplification of the numerous ways corporations in fact pay no tax), tax revenue from corporations is near a 40 year low.

3.) Tax revenue from individuals -- despite claims that we're over-taxed and over-burdened in the current economy -- is in fact near a 40 year low.

3.) Social insurance taxes are actually near their lowest in many nearly 40 years.

First, spending has increased.  But it's the kind of spending you'd expect to see in a recession, where we increase spending for things like unemployment insurance and overall increased use and utilization of the social safety net.  It's also important to remember that baby boomers are starting to retire, adding further demands on the social insurance expenditures.

Second, this is as much an issue with low taxes.  That is, raising taxes on individuals and closing loopholes for corporations would help to close the budget gap.  And, please, spare me the "we can't tax job creators" lingo; the "job creators" already have a ton of money and they're not creating squat now.