Yen At Critical Support Levels; Japan's Economy May Be In the Balance 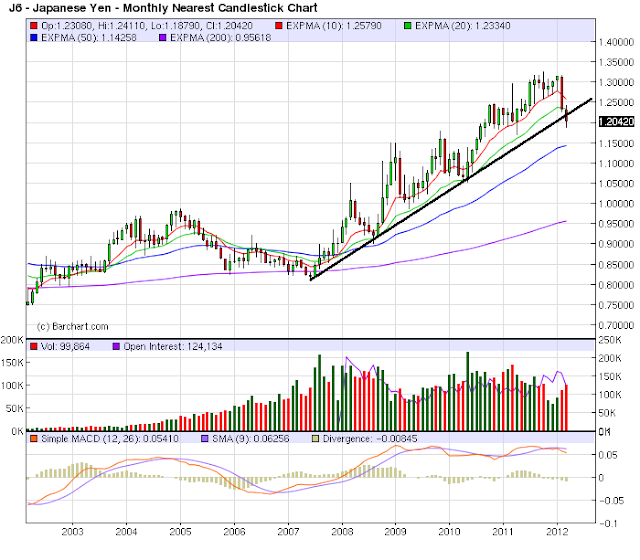 The above chart is a 10 year chart of the yen.  For the last four years, it has been in an upward trend.  However, it is now just through crucial support levels.   Prices have moved through the 10 and 20 week EMAs and the MACD has given a sell signal.  In short, this chart is looking to drop sharply now.

So, why the move now?  It started when, "Bank of Japan Governor Masaaki Shirakawa indicated on March 13 that the central bank will keep using monetary policy as a tool to tackle deflation."  At that meeting, the bank announced:

The central bank also said it would broaden a lending program to growth enterprises by 2 trillion yen ($24.35 billion), bringing the size of the program to 5.5 trillion yen.

In addition, the lending scheme will be adapted to access U.S. dollar reserves held at the central bank for loans denominated in foreign currencies. The BoJ also announced an arrangement to help small lenders that were ineligible under the original rules of the Growth-Supporting Funding Facility.

Speaking at a news conference later in the day, BoJ Gov. Masaaki Shirakawa told reporters that the boost to the lending program was designed to work in conjunction with the credit-easing moves unveiled last month.

It's continuing because of their weakening trade surplus.  Consider the following charts:

The balance of trade turned negative after the earthquake over a year ago, as this forced Japan to import more oil.  The current account balance -- which is a broader measure of international trade -- just printed a negative number.  In short, one of Japan's primary international advantages may be going away, which means the the yen has to drop.


Japan has lost competitiveness in a swath of industries that it used to dominate. Its automobile industry is losing out to Germany, South Korea and the United States. Japan’s automobile industry used to be competitive in cost and far superior in quality to its global competitors. But the world has changed. The yen EURJPY +0.17%  has dropped below 110 from as high as 160 against the euro. The South Korean USDKRW +0.24%  won was about ten against the yen and is now 13. Cost-cutting cannot offset such a big change in exchange rates. The U.S. auto industry cut its labor costs and debt burden through the government bailout. It is now more competitive than Japan’s.

Japan’s electronics industry, still significant to its economy, is losing out big time to its Asian competitors. Nothing hot in electronics is made in Japan now. U.S. companies like Apple AAPL +1.13%  leverage China’s manufacturing sector to turn out hot products. South Korea is embracing the vertically integrated model and churning out competitive products like Japan used to.
Nothing symbolizes Japan’s decline like its electronics industry. It was the envy of the world and had all the ingredients to take the industry into the mobile internet era. Instead, it embraced insulation and made products just for the Japanese market. Now it is almost irrelevant to the outside world.

Japan has only one way out — a massive devaluation. If the stable national debt is 120% of GDP, the yen needs to be devalued by 40% because devaluation is ultimately equal to the nominal GDP increase. The devaluation is likely to sustain 2% to 3% of nominal GDP growth for Japan beyond the repricing induced increase, which is necessary to restore Japan’s tax revenue. Deflation has caused Japan’s tax revenue to decline as a share of GDP. It can be only reversed through restoring nominal GDP. A devaluation of 40% can restore Japan’s competitiveness against Germany and South Korea, which will lay the foundation for Japan’s industrial recovery.

Overall, it's not a pretty picture that is emerging.