Consider the following information from Markit.  This is their respective PMI for the manufacturing and service sectors in Europe. 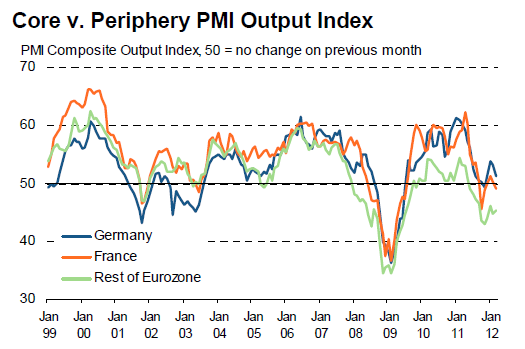 All countries dropped at the end of last year.  Only Germany has a positive PMI -- and that is a weak reading. 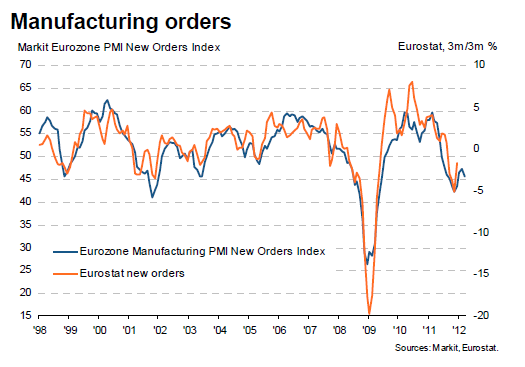 New orders have been declining for the last year and are now slightly negative. 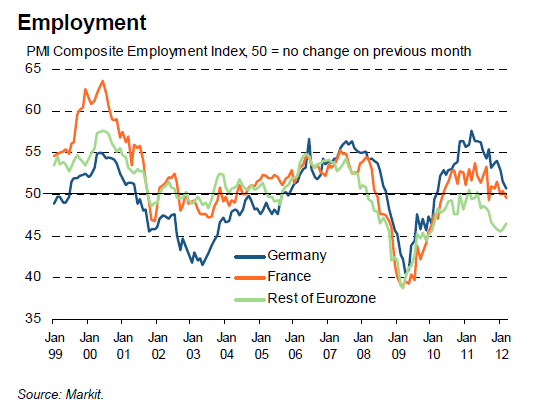 Overall, employment is weak as well, with only German showing a positive number.

Above is the latest IFO Business Climate Number from Germany.  This number appears to have rebounded somewhat, but it is still showing a weak reading.

Let's look at a few macro level statistics for the region:

Overall, EU growth has been pretty low for most of the recovery.  We see a pattern of slowing for the last three quarters -- obviously not a good development.

The above five charts show a policy conundrum for the central bank.  First, inflation is right around 3% - not painfully high.  However, with oil prices rising, expect to see EU inflation pick-up a bit.  In addition, high oil prices are squeezing EU consumers, as noted by the Financial Times:

That represents 2.8 per cent of the bloc’s gross domestic product, whereas between 2000 and 2010 it was spending on average 1.7 per cent of GDP on oil imports.

“The current price levels are on average higher than the awful year of 2008 [when oil hit a record high of $147 a barrel], and as such have the capacity to tip the global economy back into recession,” Mr Birol said in a speech in London.

He noted that every recession in the industrialised countries since the second world war had been preceded by an oil price spike.

The oil import bill is creating an additional burden for Europe’s hard-pressed consumers.
European households will spend close to 11 per cent of income on heating, lighting, cooking and personal transport this year, compared with the historical average of 6-7 per cent and 9 per cent last year, Mr Birol said.

And consider this from the latest German Consumer Climate report:


Record prices for petrol and diesel at German petrol pumps have clearly affected the mindset of consumers in March. This is reflected by the indicator for income expectations, which decreased considerably, virtually negating the gains of the previous month

Ideally, the central bank would raise interest rates a touch to stave off inflationary pressures -- and given that rates are at 1%, there is plenty of room to raise.  But, overall EU unemployment is increasing, which is hurting retail sales on both a month over month and year over year level.

Now, consider the equity averages of the three largest economies. 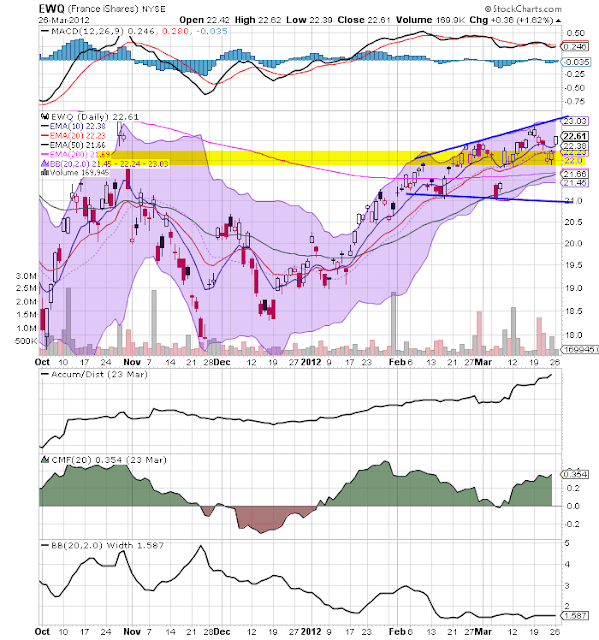 The French market is in the middle of a broadening triangle pattern, just above the 200 day EMA.  Momentum is dropping, but the volume indicators are rising.   The Bollinger Bank width is weak, indicating a period or rising volatility is probably closer than we want to think.  Prices are just above highs in the 22 area that the market reached back in late October. 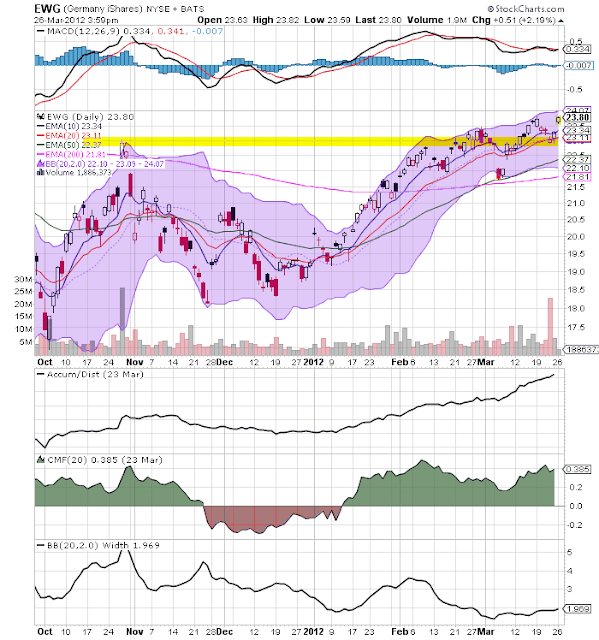 The German market is very similar to the French market.  Prices have been trading in a two point range, but on declining momentum. 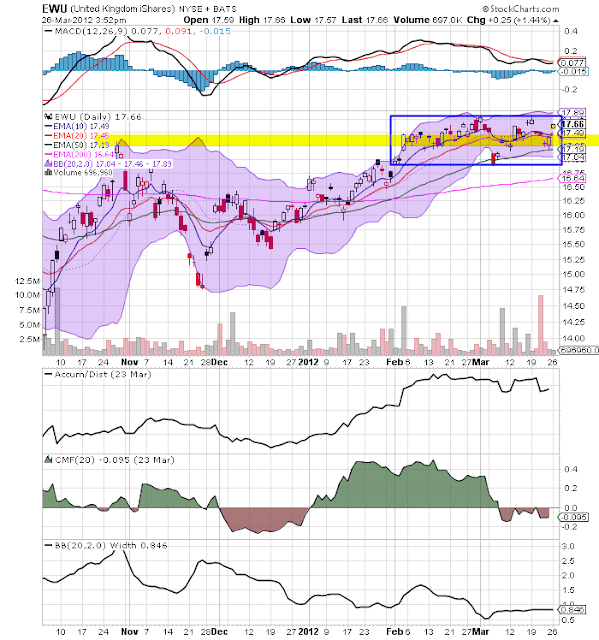 The British market is moving sideways, just about levels established in late October.   Here we see prices trading in a 1 point range on declining momentum. 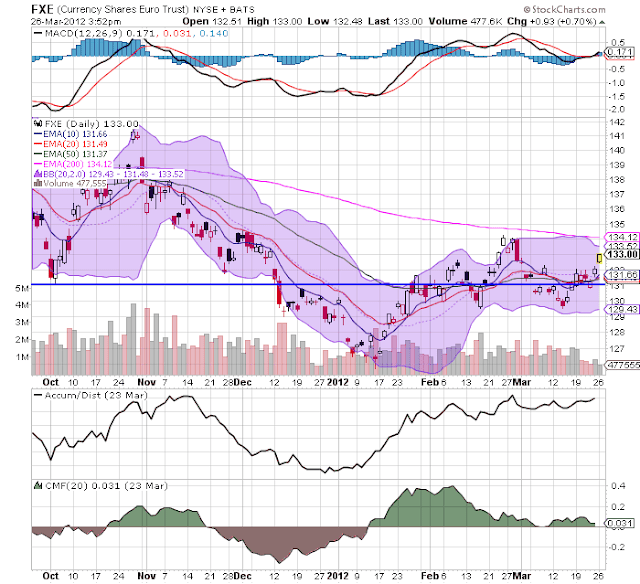 The euro has been moving sideways since February, moving between the 130 and 134 area.   The EMAs are very tangled, preventing the drawing of any major conclusion about the future market direction.

The lower growth environment is keeping the respective equity markets in check.  On the good side, the euro is inexpensive right now, making EU exports cheaper on the world market.  but with a weaker BRIC economic situation right now, there is the question of who would buy EU exports.  In addition, the bond markets of the largest economies are also yielding little more than the US right now, as shown in this chart: 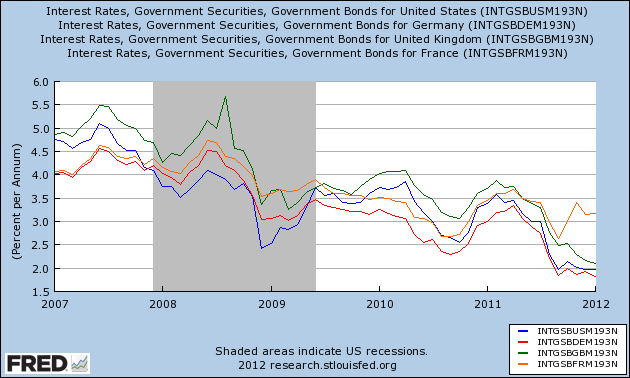 The best chance for arbitrage above would involve the French market, but that's still not a great opportunity.

So, in conclusion, Europe is not looking that good right now.