Equity Week in Review and Preview of the Upcoming Week/Month

Last week, I wrote the following about the markets:

The volume, price action and confluence of price action with fundamental events is a clear warning sign to the markets. I would expect some type of price rebound at this point, but traders have moved from their consolidation range to a period of selling. There is clearly concern on the part of market players about the fundamental economic events driving and backing the market. Expect the EMAs to provide upside resistance to any price advance.

In short, after finding some type of bottom, prices would rebound until they hit upside resistance, the most logical point of which would be the EMAs. 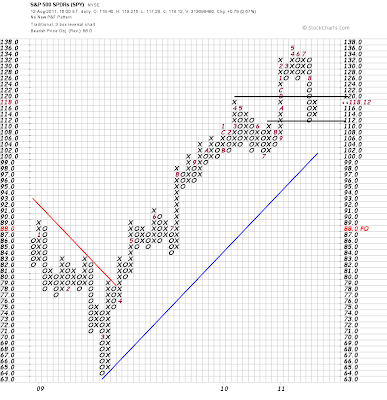 The point and figure chart shows the importance of the 112 and 120 price level.

The daily price chart shows the crazy action of the last few weeks in detail. First, notice the volume increase over the last week or so, along with the declining volume over the last two days. The acceleration on the downside shows the selling pressure and the dropping volume on the last two days rally shows a decreased enthusiasm for the market. Prices now have strong upside resistance in the EMAs. Also note the 10 day EMA is right around 120, which is also a price level established on the P&F chart.

All three of the shorter EMAs are now moving lower at sharp degrees of descent, with the 50 day EMA the only shorter EMA not to cross below the 200 day EMA. All three will provide upside price resistance for the foreseeable future. Finally, notice that Friday's price action printed a spinning top -- a candle pattern that is not particularly bullish in its implications.

All of the technical indicators are negative. The A/D line and CMF both indicate money is leaving the market, while the declining MACD shows there is no upward momentum.

The good news is it looks as though the market found a temporary bottom. But we are hardly out of the woods. An upside testing of the declining EMAs is in order, followed by a retest of the 112 level. If the 112 level holds, we'll be in far better shape. But that bottom is new and still very tenuous. Any rally should be considered suspect until we see prices advance through the 200 day EMA. Any move below the 112 area should be shorted.