The data and renewed recession: update

A couple of weeks ago I wrote a summary called The data says: no double dip recession. No sooner had it come, out, though, then the data took a couple of steps closer to the dividing line between expansion and contraction.

I noted at the time that spreads between BAA corporate bonds and treasuries hadn't widened. (this is one of the indicators that was also useful in the pre-WW2 deflationary era.) That very week, the situation changed. Here's an updated graph through the middle of last week: 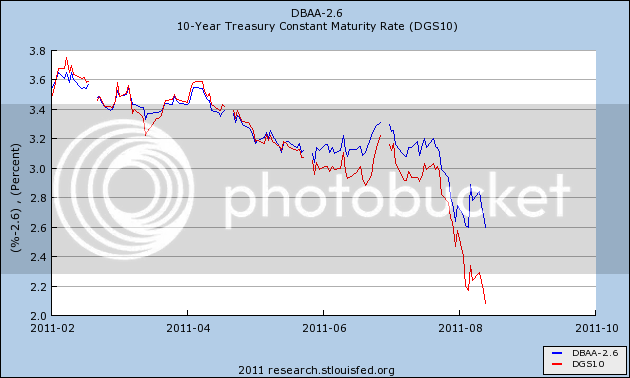 As I noted in my "Weekly Indicators" column over the weekend, this now looks like it would just before a recession.

Secondly, despite +.5% growth in retail sales, it turned out that inflation surprised to the upside as well at +.5%, meaning that real retail sales were flat: 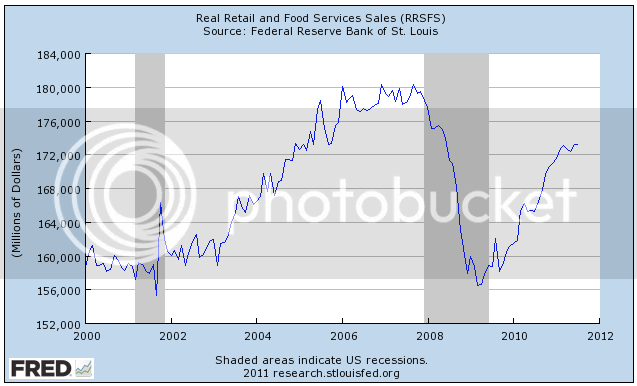 In terms of the modern leading indicators, still only 3 of 10 are lower than 6 months ago. The credit spread widening adds one negative point to the pre-WW2 readings. In terms of coincident indicators, as of July there are 4 positive, and 1 neutral.

There are two ways that I can think of whereby a contraction could start more or less simultaneously in all data series: (1) poor government policy (viz., 1937); or (2) imported from an overseas trading partner (I consider this more doubtful). I'll address those separately.