Last week, I wrote the following about the treasury market:

Overall, the IEFS are looking over-extended in the short run; prices have moved through resistance in near parabolic fashion on high volume, largely as a safe haven play. However, there is still a great deal of concern regarding the overall economy, and the Fed is not raising rates anytime soon, so there is little downward pressure on prices right now.

While I thought that prices were overextended, I was not expecting the slight sell-off we saw over the last five trading days.

Here is a chart of last week's action

Prices did sell-off a bit, finding support at levels established a few wees ago. Also note that after the sell-off, prices tried to bounce a bit higher, but printed some very small bars on low volume, indicating a lack of interest on the part of traders. However, the 10 day EMA is now moving sideways, showing a possible reversal of trend.

One indicator which confirms that the Treasury market is probably a bit expensive is its relationship to the high-yield market, which indicates the Treasury market was a bit over extended last week, as evidenced by this chart from Dragonfly Capital: 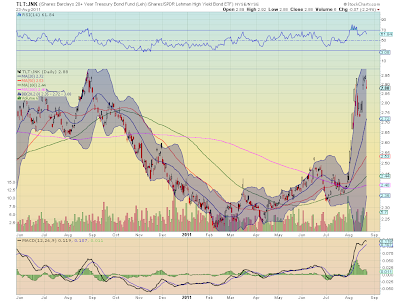 There is still a fair amount of concern in the market regarding the economy; this should keep a bid underneath Treasury prices. However, the equity markets appear to have bottomed and are rising slightly. As such, I would expect continued slight selling pressure in the Treasury market this week.