One simplified way to look at why the recovery in jobs in the last two years has been so anemic is simply to notice that construction has continued to fall throughout. At no point has construction spending for either residential or nonresidential construction turned positive on a YoY basis, but both may have made bottoms and its possible that today's data could put us very close to being YoY positive, if not over the top. Estimates are for construction spending to be flat.

I'll be unavailable when the numbers get reported at 8:30 a.m. eastern time. Bill McBride a/k/a Calculated Risk will do his usual excellent job of explaining both the residential and nonresidential numbers. Here's what I'll be looking for.

Here's total construction spending for the last year, in $ millions. The projection is that today's number will be unchanged from last month's report. If that happens, then we will be only about 2% under spending from 12 months ago: 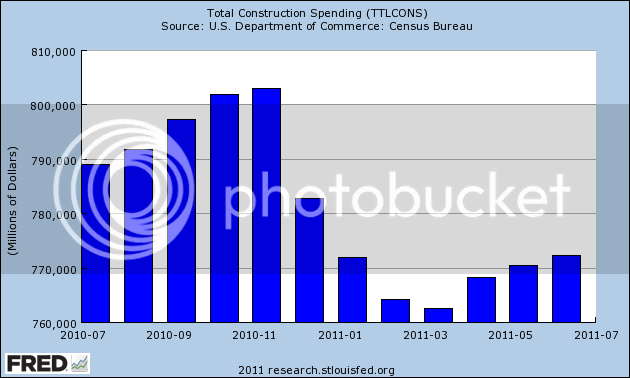 Since ultimately its all about jobs and income, let's compare total construction spending with construction jobs. As you can see, there's an unsurprisingly close fit between the two (comparing YoY% changes in each): 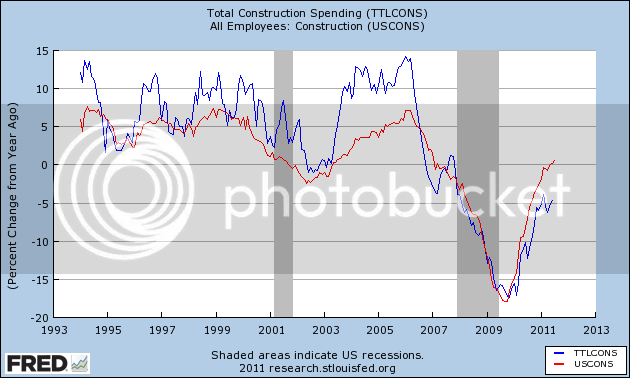 Note that being only 2% negative would be the best showing in nearly 4 years, and would bode well for construction employment. 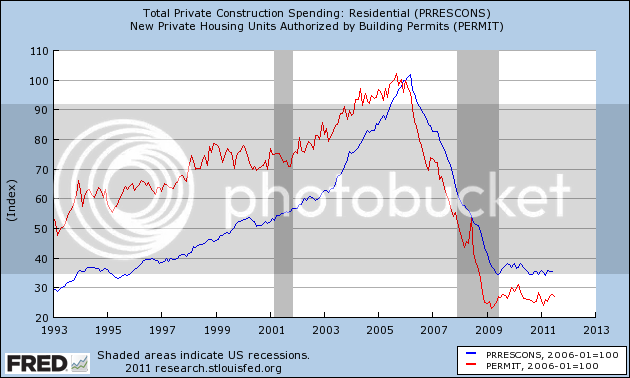 In absolute numbers, residential construction spending appears to have bottomed in March of this year at $227.254 Million. One year ago it was $235.589 Million. Last month it was $235.752 Million.

So even if residential spending is simply unchanged, then residential spending may turn YoY positive for the first time in half a decade (except for a few months when it was distorted by the $8000 housing credit), adding to the evidence that this very important and leading part of the economy has finally bottomed out.

I'll check back in later to see how we did.