Financial fear in a deep sleep

One of the drivers of last year's Summer Slowdown was the Euro-crisis-induced fear of another 2008-style financial freeze. The contrast with this year, as indicated in the below graph of LIBOR rates, showing the Euro crisis spike, and this year's plunge, is striking:

But if you want to see just how deep a sleep fear of another financial meltdown is, let's zoom back for a look that includes 2008:

A more sophisticated measure of the level of financial fear is the "TED spread." The TED spread is defined as "the difference between the three-month T-bill interest rate and three-month LIBOR." If you don't want to accept my word for it, then here is a link to Prof. Krugman's explanation right after the Bear Sterns collapse in March of that year.

And here is a graph, h/t Bloomberg, of the TED spread for the last five years: 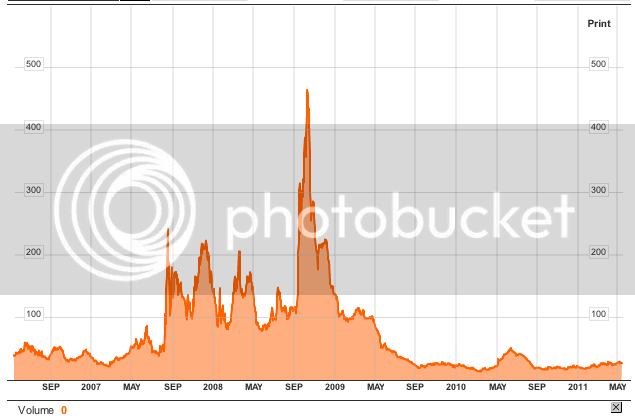 Almost exactly two years ago, in May 2009, Felix Salmon wrote in the Financial Times:

Remember the TED spread? It closed at 139bp on March 17, which was a decided improvement over the levels over 400bp we saw last fall, but was still pretty wide.

Yesterday, however, it closed at 58bp, and today it’s finally broken the 50bp barrier, last at 48bp. Back when the likes of Paul Krugman started blogging the TED spread, in March 2008, it was oscillating wildly between about 100bp and 200bp. Now it’s back to much more normal levels

So somnolent is the fear of another financial freeze that a search for "TED spread" in google trends indicates that there haven't been enough mentions in the last 12 months to generate any line at all:

This is true even though there is widespread agreement that Ireland would be better off repudiating its debt, Greece must restructure its debt, and rumors that Greece could leave the Euro. Indeed this is a very different environment than even a year ago.
Posted by New Deal democrat at 8:30:00 AM