About a year and a half ago (on August 31, 2009), I published an article titled The Fits and Starts Expansion. where I identified the following areas as economic drivers: consumer spending (albeit at a slower pace than the previous expansion), inventory adjustments, manufacturing, Asian consumers and stimulus spending. First, I should note that all these areas did contribute to the latest expansion in more than insignificant ways. However, we are now entering a different phase where a slower pace of growth is occurring.

International markets are now the primary driver of the world economy with the BRIC countries (especially India and China) accounting for a large amount of the overall growth. However, both these countries are facing problems in the form of higher than desired inflation:

As the charts indicate, India has had an uncomfortably high inflation rate for some time, while China's is also clearly increasing. As a result, both countries are raising interest rates:

India has been raising rates for over a year and China has started to raise rates. In addition, China is also raising reserve requirements to add further weight to the slowdown.

Brazil is also in a less than desirable position:

Their inflation rate is climbing, leading to

As a result of increasing rates, we're seeing declining and now negative prints in the Indian and Brazilian LEIs: 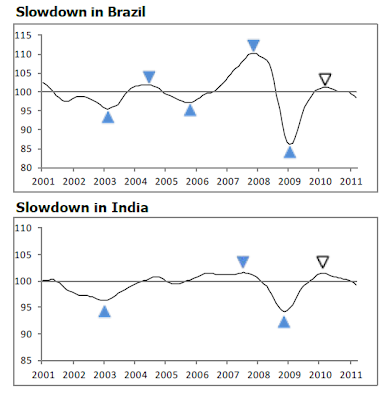 And while the Chinese LEIs are still increasing, they are doing so at a lesser rate: 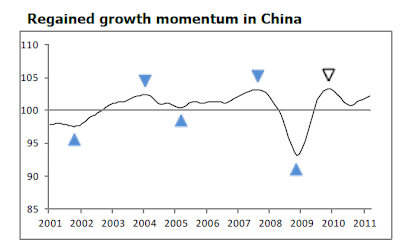 As a result of the above policies, the equity markets for all three of these countries (China, India and Brazil) have all stalled, as evidenced by their US ETFs:

The Indian market is actually in downtrend, with prices fluctuating above and below the 200 day EMA since the first of the year.

The Chinese ETF is using the 200 day EMA for technical support, with prices not having made a new high since late last year.

The Brazilian ETF has been moving more or less sideways since late last year.

With three of the four largest growing economies slowing, the US won't be far behind.
Posted by Unknown at 8:30:00 AM