Raising the Federal debt ceiling should be a political non-event, supported by the vast majority of politicians with a few vetoes for good political measure. Instead, we are treated to a veritable circus of political stupidity and posturing, with people who have absolutely no idea what constitutes an economy arguing about the debt ceiling.

But there is a deeper issue involved here, one that is regrettably difficult to quantify but one that nonetheless exists. That is uncertainty. For the last few months, we've been hearing about how Washington can't agree on either a budget or whether or not to raise the debt ceiling. The first spending issue occurred a little over a month ago as the Republicans and Democrats wrestled about whether or not to cut somewhere between $30 and $60 billion for the current years budget. The amount is unimportant; what is important is that there was extreme disagreement over a paltry amount of spending. This episode sent the entirely wrong message to the economy and the financial markets: namely, that American government barely works and may not be able to resolve the budget issue. This is without a doubt an extremely scary proposition. The U.S. is still the world's largest economy and there are important budget issues that must be resolved. The fact we're debating with such animosity about such insignificant amounts of federal spending right now indicates the bigger issue of balancing the budget may not even be possible. That is enough to halt any proposed plans.

In addition to the uncertainty created by federal gridlock, there is the increased emphasis on austerity, or cutting spending. While the government does need to get control of the budget, there is the importance question of how that is accomplished. To place this in perspective, consider the following chart that shows the percentage change in GDP from the previous quarter and how federal government spending either contributed to didn't contribute to that percentage change: 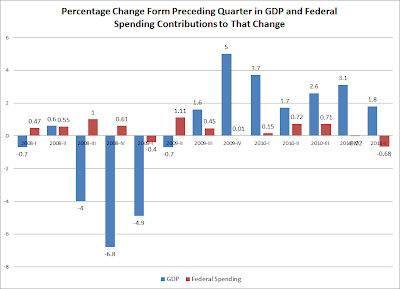 In the above chart, notice that in the last two quarters, the austerity issues at the federal level have clearly subtracted from overall growth. This again returns to the importance of understanding that government spending is variable in the GDP equation.

The debt ceiling debate is perhaps more important. That fact we're even having the debate -- or even saying shutting down the government is a good idea -- is the height of abject stupidity. To understand the sheer magnitude of the incomprehensible idiocy behind this, it's necessary to understand the importance of the government debt market.

The Treasury Yield curve is the base yield curve of the US economy. All other bonds are quoted based on their respective spread to treasuries. For example, a trading desk would quote a specific corporate credit at +50 to the corresponding Treasury, meaning the bond was trading at 50 basis points more than the corresponding Treasury. Treasury bonds are also used to hedge mortgages and corporate bond issues.

But this is not all (as if being the base interest rate curve were not not enough). As Krugman points out, Treasuries are a very important asset for the financial system:

First, US government debt plays a special role in the financial system: T-bills are the universal safe asset, the ultimate collateral. That’s why, during moments of financial stress, the interest rate on T-bills has actually gone negative. Make that safe asset suddenly unsafe, and it might cause vast disruption.

These assets have to remain safe given their incredible importance to the US financial system.

In short, arguing about the debt ceiling creates a tremendous amount of uncertainty, which slows private action. And that is something we don't need, especially as the economy is faced with a slowdown scenario.
Posted by Unknown at 11:30:00 AM