Money Velocity Is Way Too Low

The velocity of money is defined thusly:

The speed with which MONEY whizzes around the economy, or, put another way, the number of times it changes hands. Technically, it is measured as GNP divided by the MONEY SUPPLY (pick your own definition). It is an important ingredient of the QUANTITY THEORY OF MONEY.

This statistic measures how fast money is moving through the economy. For example, suppose I get paid on Friday. If I spend most of my paycheck that weekend, the money velocity created by my spending will be high. However, suppose I put all my money in a bank account and don't spend it until a year later. That would lead to a lower money velocity and lower growth.

In light of that, consider the following charts of money velocity. 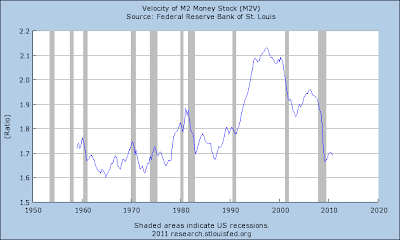 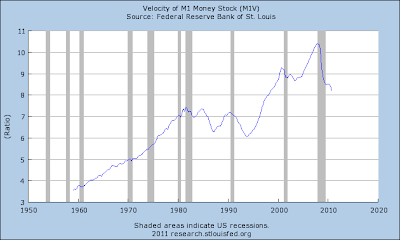 M1's velocity is still high, but it dropped during the recession and continues to move lower. 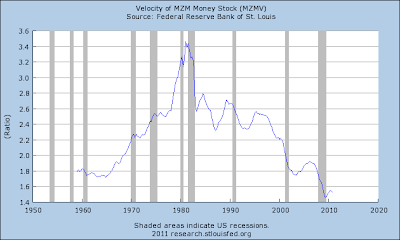 In short, all the velocity indicators are telling us that the turnover of money is weakening, indicating slower transactional speed and hence weaker economic activity.
Posted by Unknown at 11:30:00 AM