NY: Bankers report decreased demand for consumer loans and residential mortgages, increased demand for commercial mortgages and no change in demand for commercial and industrial loans. The decrease was most prevalent for residential mortgages. Bankers indicate steady demand for refinancing. Respondents report no change in credit standards for consumer loans and a tightening of credit standards for the other loan categories. No banker reported an easing of credit standards in any category. Bankers report a decrease in spreads of loan rates over costs of funds for residential mortgages but no change in spreads in the other loan categories. Respondents also note a decrease in the average deposit rate. Bankers report an uptick in delinquency rates for commercial and industrial loans but no change in delinquency rates for the other loan categories.

Philly: Total outstanding loan volume at most of the Third District banks contacted for this report has shown little change in recent weeks. Some banks in the region reported recent increases in lending extended on home equity credit lines, but other forms of consumer credit have been level or moved down. Some banks reported increases in commercial and industrial loans and some types of commercial real estate loans. One banker said, "We're making more small business loans, and commercial real estate lending is picking up except for retail properties." The outlook among Third District bankers interviewed for this report is that total loan volume will expand slowly this year, as overall economic activity advances, with gains mostly in commercial and industrial and consumer lending, but lending for residential or commercial construction is not expected to increase.

Cleveland: Bankers reported that demand for business loans grew at a modest pace since our last survey. Although demand was characterized as broad-based, some bankers commented that applications were strongest from health-care providers and energy companies. On the consumer side, a majority of our contacts indicated that credit demand has picked up slightly, primarily for vehicle purchases (direct and indirect) and home equity lines of credit. Interest rates for business and consumer credit were stable, but competitive. Demand in the residential mortgage market is mainly for refinancings, although applications have slowed due to rising interest rates. Core deposits continue to grow, but at a lower rate, with almost all growth occurring in nonmaturing products. Credit standards were unchanged. The credit quality of businesses and consumer applicants was characterized as stable or improving, while delinquency rates were steady or trending down across most portfolios. Staffing levels have shown little change during the past few weeks, and only selective hiring is expected during 2011.

Richmond: Banking activity picked up across the District. Most bank officials whom we contacted noted a marked increase in interest from business clients, often to restart projects that had been delayed over the past two years. Several bankers also reported that their lending had grown from weak levels at the end of last year. A Virginia banker stated that consumer demand, while still quite soft, had improved, while a Richmond banker in a relatively affluent neighborhood cited a spike in equity line usage (often to be used for pre-sale home renovations). Most commercial bankers reported that small business lending had strengthened somewhat, with much of the funds going to equipment upgrades and plant expansions. A bank official in West Virginia reported that auto dealer inventory financing increased, but overall the bank's loan pipeline was slack and he was unenthusiastic about loan demand in general. Reports on mortgage lending activity were mixed.

Atlanta: District bankers reported that demand for most types of loans remained low and lending standards remained tight in February and March. Many cited that credit was available but finding qualified borrowers continued to be difficult. Some community bankers noted encouraging reports of loan demand surfacing in the last few months, especially among small business owners.

Chicago: Credit conditions continued to improve in February and March. Banking contacts indicated that the business loan pipeline was still not robust, but that there were some areas of growth in manufacturing, food processing, and healthcare. Competition continued to be fierce for high-quality commercial and industrial loans (both large and small) leading to more aggressive terms and pricing. In addition, bank and non-bank investment in commercial real estate assets was also noted to be increasing. Consumer lending was little changed from the previous reporting period. Mortgage applications decreased and those made were primarily for purchase, as refinancing slowed with a rise in mortgage rates. Several contacts raised concerns about the impact that uncertainty surrounding the future of Fannie Mae and Freddie Mac and the regulatory environment were having on mortgage credit availability.

Dallas: Financial firms reported a slight improvement in overall loan demand. National banks reported some pickup in commercial and industrial (C&I) loan demand with increased corporate activity, while they continue to see weakness in commercial real estate (CRE). Regional banks noted that loan demand remains pretty flat, although there was a small increase in optimism regarding homebuilding and some CRE lending at the community-bank level. Most contacts said loan pricing remains aggressive amidst a highly competitive lending landscape. Outlooks are gradually improving in light of better outstanding loan quality and continued slow progress in lending conditions.

Frisco: District banking contacts reported that loan demand was up compared with the prior reporting period. Demand for commercial and industrial loans rose perceptibly, as businesses in a variety of sectors reportedly showed increased interest in expansionary capital spending. Demand for consumer credit also grew slightly. The reports indicated that competition among lenders to extend credit to well-qualified small and medium-sized businesses has intensified, placing downward pressure on rates and fees. Overall, however, lending standards remained somewhat restrictive for most types of consumer and business loans. Venture capital financing activity and investor interest continued to grow, particularly for companies focused on Internet and wireless applications and digital media.

Some thoughts, in no order of importance

-- Mortgage lending is at best very slow, although several districts reported an increase in home equity lines of credit

-- The general tenor of lending activity was at best low increases, while several districts reported decreases

Let's look at total loans across the US, courtesy of the St. Louis Fed: 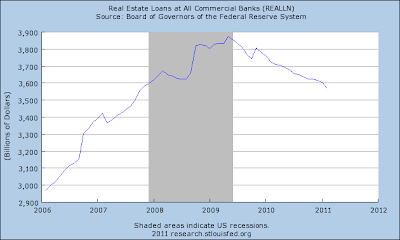 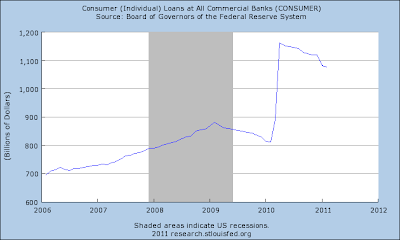 (remember, the large spike is due to a recalibration of the statistic, not to an actual increase in loans). Total consumer loans are decreasing, and have been throughout the expansion. 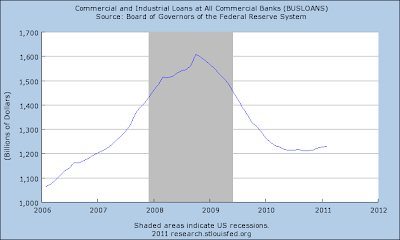 Total commercial and industrial loans have bottomed, but haven't really increased; they're still bouncing at a low level relative to previous activity.

The above chart indicates that credit is barely expanding, and that's only because of C and I loans. Consumer and real estate loans are still dropping. Part of this is due to tougher new lending standards, but some is also due to consumers cutting back on loans and businesses shying away from new indebtedness because of concerns about the future.
Posted by Unknown at 8:30:00 AM