Obama approval: in fact it's a gas, too

Yesterday I discussed how Oil prices have shot up enough to be considered a "shock" to the economy. One person in particular who should be very concerned by that is President Barack Obama. Why? Because his approval ratings, like those of George W. Bush before him, have closely tracked with the price of Oil.

Prof. Pollkatz notoriously kept a record during the eight years of Bush's presidency of a graph he called "Bush Approval: In Fact It's a Gas":

If you look carefully, you can see how Bush's approval rating lagged changes in gas prices by about 2 to 3 months consistently throughout his presidency.

Now, let's look at a graph published yesterday of the ABC/Washington Post poll showing Barack Obama's approval ratings tied for their lowest to date, and conversely disapproval the highest: 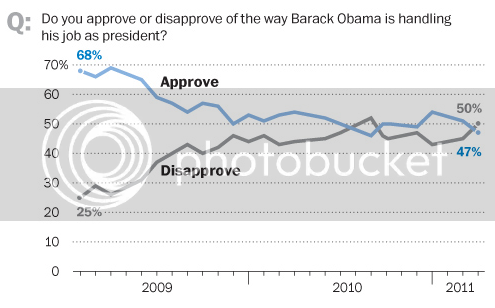 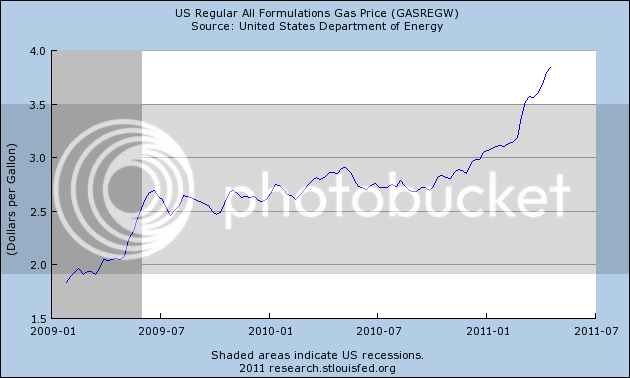 There's no rocket science here. Presidential approval ratings tend to track the economy, and gas prices, especially as they reach the thresholds we discussed yesterday, take a few months to feed through into the economy as a whole.

Barack Obama should be thanking his lucky stars that it is 2011 and not 2012. And he'd better hope that Oil's choke hold on the economy loosens by then.
Posted by New Deal democrat at 10:00:00 AM