As regular readers of this blog know, leaving aside the month over month variation, each quarter over the last 5 quarters, the average job gains have gotten better and better, to the point where, in the first 3 months of this year, more jobs were added to the economy than necessary to keep up with the growth in the labor force due to population increase.

All of that is good, but as Dean Baker pointed out in a column over the weekend, even an average of 200,000 new jobs a month is not particularly strong compared with expansions over the last several decades.

Below is a graph of monthly job gains during each jobs expansion beginning in 1975, adjusted for population. For example, a gain of .001 means that jobs equal to 1/10 of 1% of the US population were added in a particular month. The result is striking: 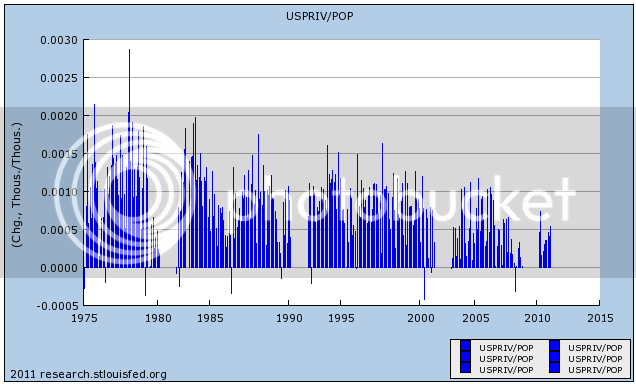 Each successive expansion has had progressively weaker job growth, and so far, this expansion is the weakest of all. For example, note that in the rebound from the 1974 oil shock, and in the early to mid 1980s, it was not uncommon at all for there to be job growth in excess of .10% or even .15% of population in a single month. In the last 10 years, that almost never happened. In today's terms, that would be 300,000 to 500,000 jobs a month.

While it is true that this jobs expansion is (hopefully) only in its early stages - only 13 months old - and may and hopefully will continue to gain in strength, comparing job gains in the last 3 months with job gains during the first 13 months of each of the past jobs expansions shown above, demonstrates the relative weakness of this recovery:

Note that the above list doesn't even adjust for population growth, so the actual comparison is even weaker. The bottom line is, we are getting some good job growth. But it's not good enough.

By contrast, as I pointed out last week, the awful terrible soshulist New Deal generated in today's terms about 750,000 jobs a month for 3 years in a row.
Posted by New Deal democrat at 11:30:00 AM