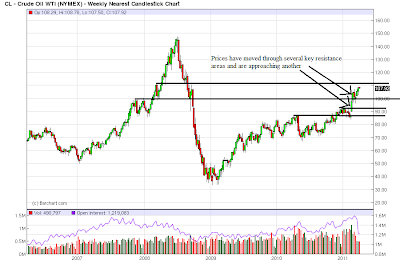 On the weekly chart, oil prices have moved through key resistance areas and are approaching a third. Note the length of time that prices were somewhat range bound between the 70-80 price area -- about 3/4 of a year. The longer the base, the stronger the rally from that base. Also note the strength of the move from the $90 price level -- prices printed a very strong bar. 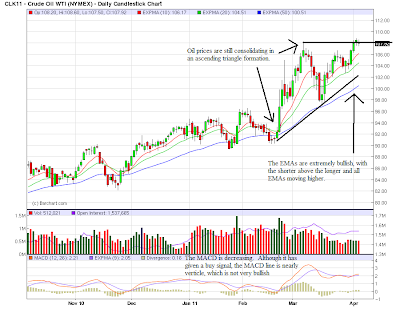 On the daily, chart, prices are still consolidating in a triangle pattern. While the EMAs are very bullish (the shorter are above the longer and all are moving higher) the MACD could be stronger. Also note the last two days have printed very weak candles -- candles with thin bodies, indicating a lack of intra-say price action. 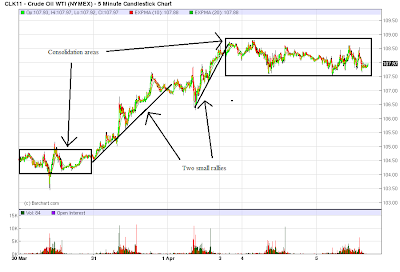 The 5-minute chart shows over the last five days a consolidation/rally/consolidation pattern.

The 110/price level is important from two perspectives: it's a round number which the market likes and the level was hit over two years ago, providing technical resistance. In addition, its above the current resistance level of about 108 and should provide a nice "layover" in the event of an upward price move.

However, on the fundamental side, there are problems for further price increases.

1.) There is evidence that increased oil prices are hurting overall US demand.
2.) China is trying to slow its economy
3.) There is talk of a possible resolution to the Libyan situation.

While the third point is ephemeral, the first two go right to demand, indicating a slowing of demand is taking place, which may slow oil's price increase. This is confirmed by the weaker MACD reading.

While I expect further price increases, I think the fundamental side of the equation will limit these increases for the time being.
Posted by Unknown at 4:49:00 PM