Notes on Job creation and the Unemployment rate

With March's payrolls number reported, let me update a few of the series showing how weekly initial jobless claims have been correlating with new job creation and leading the unemployment rate.

First, here is a graph of initial jobless claims as a percent of population (blue) vs. the unemployment rate (red): 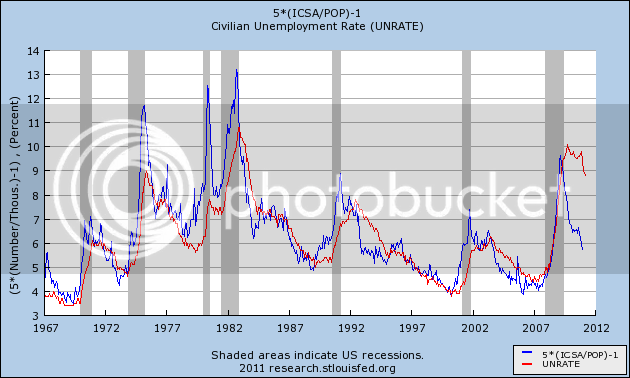 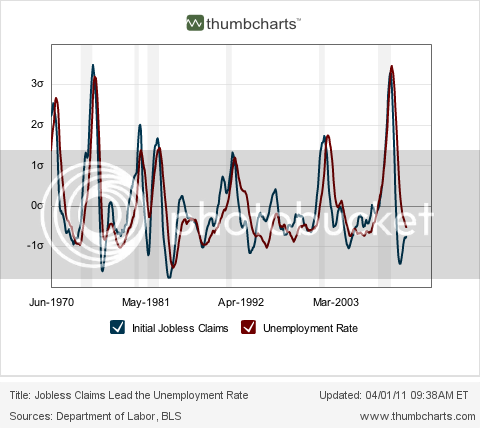 Once again, initial jobless claims lead the unemployment rate. The relationship depicted here is a little more complex. The continuing decline in YoY iinitial jobless claims is predicting that the 6 month average of the unemployment rate will continue to decline YoY. This suggests that in the next several months, the October and November 9.4% and 9.8% unemployment readings will be replaced with significantly lower numbers, although not necessarily lower than March's 8.8% rate.

Secondly, let's update the scatter graph showing the correlation in recently reported initial jobless claims, with payroll growth in the same month. The below graph shows the correlation of initial jobless claims with jobs created in the private sector (blue) and all payrolls including government (excluding those months where census hiring and firing distorted the figures) since the peak in initial claims of March 2009: 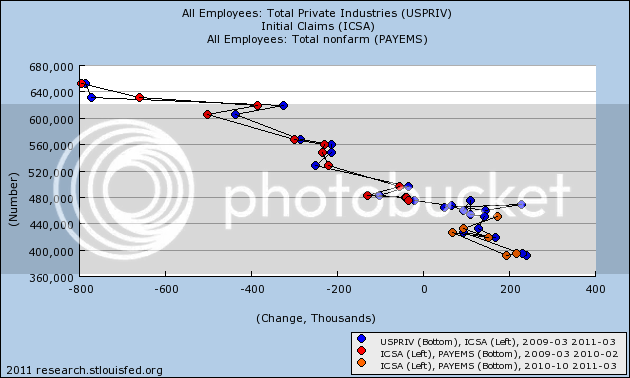 The relationship continues to be close. Note that (1) job growth has occurred once the average of initial jobless claims dropped below 475,000; (2) recent job growth averaging over 150,000 a month with initial claims in the vicinity of 400,000 is no fluke; and finally (3) it appears that we only need to see initial claims drop to about 370,000 a month to give us the 300,000 monthly job growth we need to make a real dent in the 8 million long term job deficit caused by the great recession.

Third, let's compare this job recovery with previous jobs recoveries. Net job creation is hires minus fires. Initial jobless claims generally tell us about the "firing" part of that metric. Conventional wisdom is, firing has declined sharply in this recovery, but "hiring" remains lackluster. In the below graphs, pay attention to how much firing was consistent with net payroll growth. Consider especially what that means for the "hiring" part of the payrolls equation.

First, here is the current recovery compared with the 1975 jobs recovery: 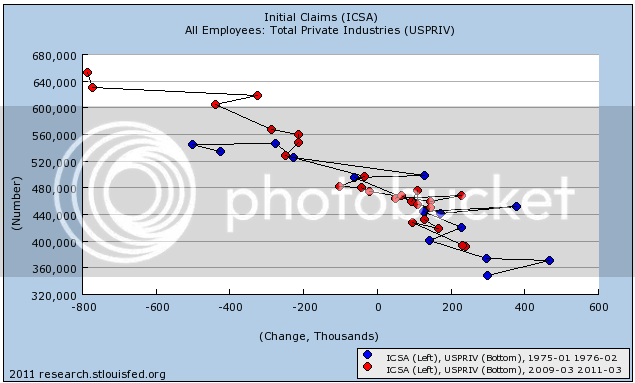 The two recoveries are tracking quite closely. Notice that in the 1975 recovery, 300,000 new jobs a month were created at the time when there were about 370,000 layoffs per week. If this recovery stays on the same track, we don't have far to go for some very good job creation numbers.

Next, here is the current recovery compared with the 1983 recovery: 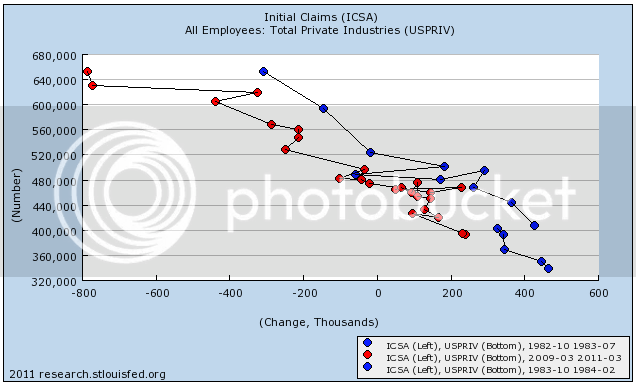 In that recovery, there was some enormous new job creation. On net, 300,000 new jobs a month were being created at a time when there were still 450,000 layoffs per week. 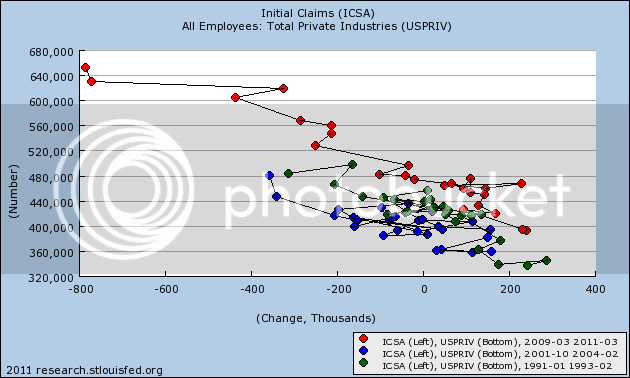 This is strong evidence against the conventional wisdom that it is the lack of job creation that has been lagging in this jobs recovery. On the contrary, on a relative basis new job creation has been strong. It is the relentless continuation of elevated layoffs that has been the problem.
Posted by New Deal democrat at 8:30:00 AM