Holiday Sales Are Strongest in Years

Shoppers spent more money this holiday season than even before the recession, according to preliminary retail data released on Monday.

After a 6 percent free fall in 2008 and a 4 percent uptick last year, retail spending rose 5.5 percent in the 50 days before Christmas, exceeding even the more optimistic forecasts, according to MasterCard Advisors SpendingPulse, which tracks retail spending.

The rise was seen in just about every retail category. Apparel led the way, with an increase of 11.2 percent. Jewelry was up 8.4 percent, and luxury goods like handbags and expensive department-store clothes increased 6.7 percent. There was even a slight increase in purchases of home furniture, which had four consecutive years of declining sales. The figures include in-store and online sales, and exclude autos. 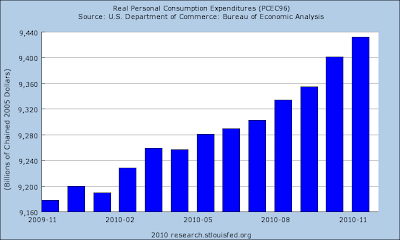 Real PCEs have been increasing for most of the last year. 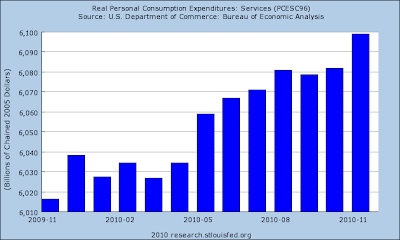 The largest component of PCEs are services, which account for about 65% of all purchases. While these were moving sideways for the last three months, they jumped strongly last month. Also note they have increased over the course of the last year. 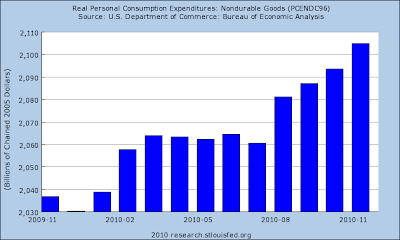 Non-durable purchases account for about 22% of all expenditures, stalled for the first have of the year, but have risen strongly over the last four months. 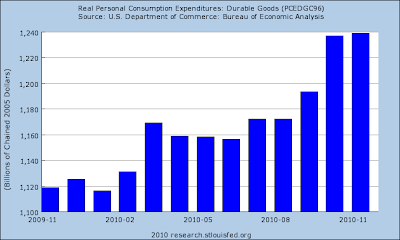 Durable goods also stalled in the spring, but have been increasing for the last four months as well.