The number of U.S. workers filing new applications for jobless benefits fell 34,000 to a seasonally adjusted 388,000 in the week ended Dec. 25, hitting the lowest level since July of 2008, the Labor Department reported Thursday. Economists polled by MarketWatch had expected initial claims of 413,000. The four-week average of new claims, which is smoother than the weekly data, fell 12,500 to 414,000, also reaching the lowest level since July of 2008.

This is the first time we've seen these numbers below 400,000, so we shouldn't get too excited. HOWEVER -- this is a great print and a fabulous way to end the year.
====
NDD here: I agree with Bonddad's comment above, and add that weekly readings during the height of the holiday season are particularly vulnerable to seasonality. But with those cautions, this is still excellent news.

Here is the updated graph of the 4 week moving average in initial jobless claims (blue) since their March 2009 high, compared with monthly new nonfarm payrolls (inverted, in thousands, red): 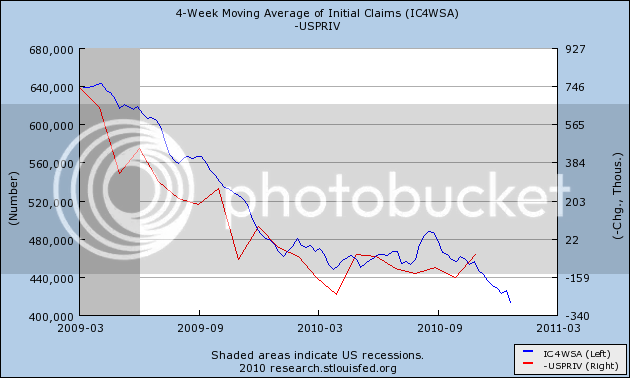 Here is the scatter graph comparing initial jobless claims with payrolls since the March 2009 high in claims: 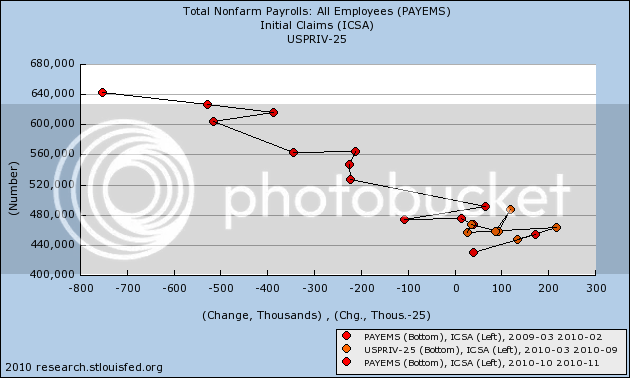 Here is the same comparison including the 1974 and 1982 recessions: 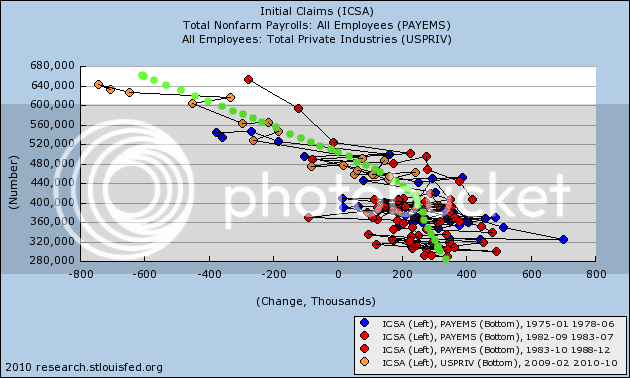 The green line is my best estimate of the trend line comparing the two data series coming out of severe recessions. It is one reason why I expect November's initial jobs report of +39,000 to be revised higher. More importantly, at a 4 week average of 414,000, it suggests that December payrolls should come in somewhere near +200,000 ( +/- 125,000).
====
And Atrios calls it "Actual good news." That makes it official.
Posted by Unknown at 7:47:00 AM